Mitch Legan recently accepted a position with WGN-TV in Chicago.

He was previously a a multimedia reporter with WTIU/WFIU news, the public television and radio stations in Bloomington, Indiana.

Back in the spring, Legan spoke with KBIA producer Shea Baechle about his work covering Indiana.

What is your most impactful memory that you've made?

Um, my most impactful memory was in Owen County. The county commissioners—it's a rural county, you know, 20 minutes away—the Owen County Commissioners tried to pass an ordinance that basically tried to get rid of the gay pride festival from taking place on the courthouse square.

And they tried to disguise it as, like a, as an ordinance because it cost too much money to hold events there.

But it turned out that there was a group that really just didn't want the gay pride festival taking place on the courthouse square.

And so I was one of the first reporters to get on that.

I covered that pretty extensively, you know, every Monday night driving 30 minutes there 30 minutes back, and getting to know the people there.

And so the best, the memory that you asked me about—this was very long way to get there—but I received a letter from some of the people in Spencer, in Owen County, kind of just thanking me for my reporting, because they said, If I had not reported on it, that people may or might not have known about it.

And so the ordinance did end up going through.

But, I guess as part of my reporting, the community kind of rallied around it. That festival has become bigger than it ever has been. And the the candidates chose not to run again.

And what would you say is your most rewarding work that you've done so far?

Most rewarding... Okay, um, I've done a lot of reporting on substance issues here in Indiana.

There was a big HIV outbreak in 2015, when I was graduating from Missouri, that was spurred by IV drug use.

And so I've been doing a lot of follow up reporting on that.

And I report a lot on the recovery community here in Indiana.

And I think I've been able to give a voice to, you know, a section of the community that doesn't get to get its voice out there a lot—kind of reporting on issues that people might not understand.

The it was in Scott County, Indiana, they set up a needle exchange.

And when I started reporting on that issue, I thought it was a little weird. You know, why are you giving people needles? Doesn't that encourage drug use?

And by learning that, I feel like I've been able to maybe share, you know, information about needle exchanges, substance recovery, that maybe paints it in a different light than what some people might expect.

So I'd say that kind of recovery, substance issue reporting has been the most rewarding for me so far.

How did KBIA specifically influence where you are today?

Having a public media station on campus was huge.

You cover different things and you cover it differently with public media. You get to get a little more meat on the bone sort of, you know, really dive into issues and so KBIA was excellent.

They, you know, send you out into the world and they have you reporting from day one. 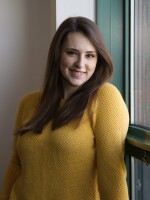