Vox Magazine's August "Behind the Issue"

It's the dog days of summer, and "Dog Daze," the summer issue from Vox Magazine, is on newsstands and online now.

In this month's Behind the Issue, Art Director Moy Zhong and Editor-in-Chief Courtney Perrett spoke about a couple of this month's standout stories.

Vox Magazine is Columbia's connection to what's happening in our city, providing perspective on the news and culture people are talking about.

"It gets to the core of what makes Columbia special: it's a city that feels like a small town, a community that thrives on local values. I know it sounds corny, but simply put, Song Swap captured the essence of Columbia in its purest form."

Breaking tradition: the importance of diversifying the literary canon

"I'm into conversation and discussion about texts," Lynn Itagaki, an MU associate professor of English and Women's and Gender Studies, says. "It's more about how (books) have played out over decades or centuries and how they've impacted our culture." 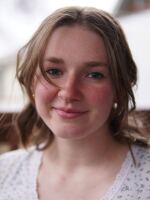