Off the Clock - A Local Town’s Special Claim to Fame: Winston Churchill

One early September evening British Lord Alan Watson prepared for a ribbon cutting. . He held the scissors and snipped the ribbon at the National Churchill Museum on the campus of Westminster College in Fulton.

Watson and Edwina Sandys, Winston Churchill’s granddaughter, among others, were opening the museum’s newest exhibit: a typed draft of the Iron Curtain speech, hung on frames throughout the room.

In Fulton, the city where Churchill gave the landmark speech in 1946 on the campus of Westminster College, the drafts don’t just represent an important speech on the dangers of the Soviet Union. As Watson puts it, they are Fulton’s “membership of history.”

“They realized something was happening here of the greatest importance,” Watson said.

The ribbon-cutting was just part of a full day of festivities celebrating the 70th anniversary of the speech – from a ride in a military jeep in the morning to a speech from Watson in the Westminster College gymnasium in the evening.

For museum director Timothy Riley, the event holds other significance: to celebrate the man the museum honors.

“We always have so many layers of history with the museum, and whenever that history comes alive with people who have lived it or people who have studied it in-depth and shared their knowledge with us, it’s always exciting,” Riley said.

Many of the people at the event were captivated by Churchill and his legacy, though hardly for the same reason. Sandys said this has to do with her grandfather’s status as a Renaissance man.

“He was a very all-round person. He was a soldier, he was a speaker, he was a writer, he was a painter, you see, so almost everybody could find something that they were interested in,” Sandys said.

Riley and the other organizers paid attention to the details. At a luncheon inside the museum’s library, attendees ate the exact same meal Churchill ate before he gave the “Iron Curtain” speech 70 years ago – complete with a Callaway County ham.

Baxter Watson (no relation to the British Lord) snapped the photograph when he was a second-year student at Westminster.

Watson waited for three and a half hours to take the photo at his chosen spot on the campus.

“It was luck,” Watson said, “because I happened to get the right moment.”

Watson was later part of the procession that led the honored guests from building to building – and said he admired how Truman handled the situation.

“Mr. Truman was not answering the public, he was saluting Winston Churchill,” Watson said. “And this is what a person who really is a good, sensitive human being does when he is an escort.”

Watson has stopped by the museum from time to time for years. Now 93, he relies on a friend to drive him from his home near St. Louis to Fulton.

He says he’s one of the last living links the museum has to Churchill’s famous speech.

“It’s ancient or old, but it’s not ancient history yet.” Watson said. “I think when I check out, in the next decade sometime, I think it will suddenly be ancient history here.”

Riley says the museum is working to keep Churchill’s speech in the minds of young people, including the schoolchildren who toured the museum on the day of the ribbon-cutting.

“It’s really heartwarming to know that the next generation, for whom Churchill is a couple of paragraphs in a history book, can come alive,” Riley said. “That’s why we’re here.” 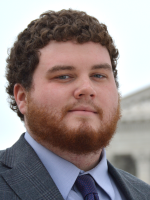 Chris Mathews
Chris Mathews was born and raised in San Antonio, Texas. He got his first taste of journalism while writing for his high school newspaper, prompting him to pursue a degree in the field. Chris left Texas and headed north to study at the Missouri School of Journalism. He graduated with a degree in entrepreneurial journalism and a minor in business in May 2016, but returned to MU in August to pursue a master’s degree centered around digital design and production. This is his first semester hosting “Off the Clock” on KBIA. In his free time, you'll likely find Chris playing guitar with friends or watching his favorite sports team, the San Antonio Spurs.
See stories by Chris Mathews