While Dr. Amy Knopps has been busy preparing Marching Mizzou for its trip to New York City to perform in the Macy's Thanksgiving Day Parade, she's also been busy making a name for herself as one of only three female-identifying marching band directors in the SEC.

Sarah Petrowich: How did you get involved in music, and what got you so interested in marching band particularly?

Dr. Amy Knopps: Well, growing up, I was always around the arts. I saw my mom and dad as models. My dad was a teacher and my mom was a nurse, and I saw them helping people; I saw them teaching people, and that was impactful to me, and I grew very passionate about music.

I remember one time specifically when we were in fifth grade band; we were working on our chromatic scale, and for some reason, it came very naturally to me.

Music has become very natural to me, and I have a great passion for it. And my great friend who was next to me, we were in the Brownies together, she was unfortunately struggling with her chromatic scale. And I remember my director at the time, female identifying, asked me, “Hey, would you mind going outside and helping your friend Jodie? You know, you have caught on to the chromatic scale, it's come really easy for you — would you mind helping?”

And I said of course because I saw that from my parents. I was leading from a very early age and again, when I earned the position to drum major, I served as that pseudo director.

That continued here at the collegiate level when I was drum major of Marching Mizzou during my own time in Marching Mizzou, as an undergraduate student, and it just took off from there.

Petrowich: So you're one of three female marching band directors in the SEC, and Kentucky just appointed their first female director ever in 2021.

And this lack of female representation in collegiate marching bands is pretty common, even the Big 10 had their first ever female marching band director in 2016.

Can you tell us a little bit about being a woman in such a male dominated industry, and why you think these gender inclusive steps have taken so long?

Knopps: Great question. I am sad that it has taken this long to get this amount of female-identifying directors into the collegiate ranks.

And those fierce women that you just referred to are my great friends and colleagues, and we are proud to be leading our programs at power five conferences, and again at the collegiate level.

I can only speak to my journey — this was a goal of mine since I first became drum major at the high school level. I never really believed anyone who told me I could not do it.

I just put my nose down and I did the work. And here I am. 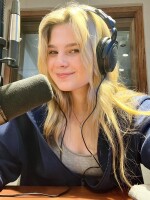