Judy Baker is the Democratic candidate for the 19th district state senate seat. She is running against Republican Incumbent Caleb Rowden. She recently sat down with KBIA’s Noah Zahn to talk about some of her health policy goals in an election special from Missouri Health Talks.

Baker’s opponent, Senate Majority Leader Caleb Rowden, did not respond to our request for an interview by airtime.

Noah Zahn: So, in August, as you know, Missouri became the 38th state to pass Medicaid expansion. Can you just tell me a little bit about what this Medicaid expansion means for Missourians? And what role it will play in the upcoming November elections?

Judy Baker: I think it’s the number one question on everyone's mind, but what a lot of people don't understand about Medicaid expansion is it is for working people – some people work two part-time jobs and don't have health care. So, they're still working.

So, Medicaid expansion literally is for people who are making above the 21st percentile of federal poverty level, which is what it is now, and takes it to 133 percent of the federal poverty level, and so, that's that gap insurance that is going to be available for people that aren't making enough money to get it at their job, but are making too much money to be eligible now. So, you know, just that alone, I think is going to be a very big factor in the election.

Noah Zahn: Now, I'd like to discuss with you something you brought up in a recent debate with the incumbent Senator Rowden, where you claimed that Medicaid expansion in Missouri would grow state revenues, increase the quality of care, and decrease medical costs?

Judy Baker: Yes. So, in the Affordable Care Act and the Medicaid expansion population, there's this opportunity to do some new things with Medicaid that would give us the opportunity to raise the quality, in that people can have more care coordination. That doctors can be paid for preventive care, rather than waiting until it's too late and something very expensive.

You know, I think this ability to keep our protections for pre-existing conditions and students and youth being able stay on their parents plan till they're 26, and then all of the preventive measures that are in the bill, are incredibly important.

I think people know that – in the Senate District 19, Medicaid expansion passed at 63 percent, and my opponent voted against it every single time.

Medicaid expansion, of course, it improves the economy. $2.5 billion a year is the economic activity that is expected to be gained by bringing those tax dollars back here, and that means about 16,000 new jobs – and they’re high paying jobs.

That $2.5 billion and that 16,000 jobs are the biggest economic expansion jobs package we've ever had in the state of Missouri, and it has been left on the table for seven years.

I am so glad that the voters passed it [Medicaid expansion]. I am sorry they had to go to the ballot to do it because their representatives won't, but I'm really excited about implementing it next year. 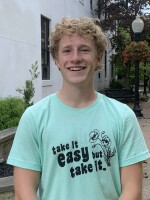 Rebecca Smith
Rebecca Smith is a reporter and producer for the KBIA Health & Wealth desk. She was born and raised in Rolla, Missouri, and graduated with degrees in Journalism and Chemistry from Truman State University in May 2014. Rebecca comes to KBIA from St. Louis Public Radio, where she worked as the news intern and covered religion, neighborhood growth and the continued unrest in Ferguson, MO.
See stories by Rebecca Smith
Related Content