After his son was born last February, Marcus Washington and his partner lost custody pretty quickly. The mother struggled with substance abuse. Washington said he tried to help her through it so they could get their son back, but she didn't want to get better.

"We had to separate. My kid came first," he said.

"It was something I was really, really skeptical about," he said. "I didn't think I was going to get him. I fought hard for it. Did everything I was supposed to do. Went through a lot of stuff to get here, but I did it."

In a shirt and hat that read "I am blessed," Washington and his 16-month-old joined several families Saturday at the Sheila Kemper Dietrich Park, across from the Jackson County Family Court, to celebrate their reunification.

The court says last year 42% of children who entered family court due to abuse or neglect were reunited with their birth families.

"It's really hard once a child is taken from a parent's custody, and then they're asked to do all these services to prove they're fit to get these kids back. That's a lot to overcome," Berezoski said. "Over the years we haven't done a good enough job to celebrate them. We wanted to change that."

"It makes me feel really good, knowing her father can't hurt her anymore," Coe said. "It means a ton to me that I know I can protect her, and that's she safe."

Last February, all three of Coe's children were taken from her because of the condition of her house.

She said a messy divorce left her in a bad situation. But, after her children were taken, she followed court orders, found a new living situation and worked to get her finances in order. She's still fighting for custody of her two sons, who have a different father, but she said she's glad at least to have her daughter home.

"There was times I wanted to stop fighting, but I kept pushing on. There was times I felt like I was at the end of my rope, but I just kept holding on and that rope kept lasting further and further," Coe said.

After a rough childhood and trouble in school, Feymi Morales Zuniga was taken at age 12 from her mom, who immigrated from Mexico. She was reunited with her mom in 2015, but got pregnant shortly thereafter, which sent her back under the watch of the foster care system.

She said the system has helped her support and keep full custody of her 2-year-old Johnny Washington, and get out of a domestic violence relationship she had with her son's father.

Morales Zuniga, now 19, is finishing her senior year at De La Salle, and hopes to enter the Kansas City Police Academy next year.

Amanda Fahrenbocker lost custody of her children when her daughter, Carter, was born. The doctors found the newborn had been exposed to drugs Fahrenbocker had been using.

"My last relapse, I couldn't stop," she said.

She said she struggled with addiction for 20 years. But when her children were taken from her, she saw it as a turning point.

"I knew that I had made mistakes and I was ready to face the consequences," she said.

Less than a year later, she got them back.

A single mom of six, Fahrenbocker just graduated from Amethyst Place — drug-free recovery housing for women and their children — where she was under 24-hour supervision. She said she and her children are getting a house next month. She has a job in marketing, and plans to attend welding school in August.

"I'm proud of myself. Some days it seems like a dream. I can't believe I can do all this. I work and I take care of the kids and keep the house clean and I keep reaching for more goals," she said.

Fahrenbocker said she couldn't have done it without the services and guidance she got through family court, her lawyer and Jackson County CASA, or Court-Appointed Special Advocates for Children. She said she felt they really wanted to help her, and that that made the difference.

Andrea Tudhope is a reporter at KCUR 89.3. Email her at andreat@kcur.org, and follow her on Twitter @andreatudhope. 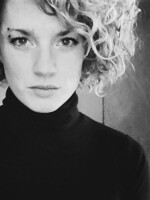 Andrea Tudhope
Andrea Tudhope is a freelance reporter for KCUR, and an associate producer for Central Standard. She covers everything from sexual assault and homicide, to domestic violence and race relations. In 2012, Andrea spent a year editing, conducting interviews and analyzing data for the Colorado Springs Gazette series "Other Than Honorable," which exposed widespread mistreatment of wounded combat veterans. The series, written by investigative reporter Dave Philipps, won a Pulitzer Prize for National Reporting in 2014. Since graduating from Colorado College in 2013 with a degree in Comparative Literature and Philosophy, her work has appeared in The Huffington Post and The Colorado Independent. She is currently working on a book based on field research and interviews she conducted in Dublin, Ireland in 2012.
See stories by Andrea Tudhope