Hidden in plain sight, Kansas City’s historic pocket cemeteries are survivors of urban encroachment and suburban sprawl, revitalized by the pulse of curiosity.

Their resilience is thanks to local historians, faithful descendants, amateur sleuths and dedicated genealogists, working to piece together and honor the stories of people who lived and died in the area more than 100, 200, even 2,000 years ago. Pocket cemeteries are found in quiet neighborhoods, sandwiched between backyard fences, at the end of dead-end roads, out in forgotten fields or squeezed along the city’s streets and byways, adding a somber hint of peripheral mystery to the daily commute.

These remnants are sometimes all that remains of a community, a family, or a moment in time.

Here are brief sketches of a few of the area’s oldest grave sites. Some are on private property and others only allow visitors during the day, but each cemetery carries a unique story.

Union Cemetery, Kansas City’s oldest existing public cemetery, isn’t exactly hidden, situated between Main Street and Gilham at Union Hill. But it is a place out of time -- the ground smells of walnut and wild strawberry and monarchs flutter through on their migratory path, while dog walkers and picnickers frequent the area on fine days.

Established in 1857, when a cholera epidemic outpaced capacity at the region’s other public cemeteries, it was called Union because it was founded for both the town of Westport and the Town of Kansas. Now, the cemetery is part of the Kansas City Parks Department and a dedicated Historical Society hosts tours, events, and coordinates restoration of the cemetery. This month, the Coterie Theatre is presenting “Electric Poe” at Union Cemetery, though the remaining shows are sold out.

Prior to Union Cemetery, local deceased were buried at either City Cemetery (founded 1847) at Oak Street and Independence Boulevard, now under a highway exchange, or at Westport’s Yoacham Cemetery (1835), now the intersection of Pennsylvania Avenue and Archibald Street.

In the 1800s, many Native American nations, like the Shawnee, Wyandot, and Potawatomi, were removed from their ancestral homes in the east, joining the people already living in this area, such as the Kansa and Osage tribes. But long before that was the Hopewell people, who occupied this region sometime between 100 and 500 CE. They created burial mounds found along rivers and bluffs during the 19th and early 20th centuries, though many of those have been destroyed. Learn more about the history and archaeological findings in the area at Renner Brenner Site Park, in Riverside, Missouri.

The town of Shawnee, Kansas, was founded by the Shawnee Tribe, which arrived from Ohio in the 1820s. They were removed to Oklahoma five decades later, but some of their citizens remain in a half-acre graveyard at the quiet end of 59th Terrace, off of Neiman Road. Established in 1854 (though the first burial was in 1837), the cemetery contains Chief Joseph Parks, who died in 1859. The last burial, in 1870, was for Julia Ann, the wife of Chief Charles BlueJacket. Just a few blocks away is the Chief Charles Bluejacket Memorial Fountain.

Another prominent Shawnee leader buried in Kansas is Tenskwatawa, known as Prophet, who died in 1837. His final resting place is White Feather Spring, now in the Argentine neighborhood of Kansas City, Kansas. Located on private property, where the street dead ends into a wooded valley, a curbside pillar displays a plaque to share a portion of his story.

Tucked behind the buildings in downtown Kansas City, Kansas, the Wyandot National Burial Ground, founded in 1843, was nearly demolished in the early 20th Century. As detailed in KCUR’s “A People’s History of Kansas City” podcast, three sisters barricaded themselves in the cemetery to save it from destruction. (Note: the burial ground is also referred to as the Huron Indian Cemetery, but that name is not considered accurate by the Wyandot Nation.)

While the town of Quindaro only lasted a few years, its legacy remains in the KCK area. It was founded in 1856 by abolitionists and became a key stop on the Underground Railroad. The area includes two historic Quindaro Cemeteries. The larger cemetery is attached to Mount Hope Cemetery along Parallel Parkway. The other, the Old Quindaro Cemetery, was established in 1855. It overlooks the Missouri River from the Quindaro Bluffs, only accessible via a winding, wooded road (and not open to the public).

This October, the Wyandotte County Museum launched a self-guided tour of the county’s cemeteries.

Embroiled in the border battles in the run up to the Civil War, the region’s African American population in the 1800s was a mix of free and enslaved people. Relatives and historians still seek genealogical answers to family mysteries, too often buried in unmarked graves. Folks in Weston, Missouri, attempting to rectify this erasure, erected a monument in 2019 to honor the nearly 400 Black people buried in the Laurel Hill Cemetery (established circa 1840).

Many pocket cemeteries are the remnants of family plots or abandoned communities, forgotten with changes in ownership or consumed by property development.

Along Shawnee Mission Parkway, near Canterbury Road, is the Shawnee Methodist Mission Cemetery, just a few blocks south of the Shawnee Indian Mission Historical Site in Fairway. Here lies Thomas Johnson, for whom the county is named, and his family. Johnson founded the mission in 1839. As KCUR explained in 2015, he left a controversial past; he was pro-slavery up until the Civil War and was murdered in his bed in 1865, though the crime was never solved.

Most small burial plots don’t harbor dramatic histories or legendary figures. But all of them hold stories, which require rediscovery and preservation by local communities. Some pocket cemeteries have dedicated historical societies and websites; others might simply have a sign staked in front and the grass mown by a volunteer caretaker.

The Linwood Pioneer Cemetery, established in 1872 at 95th Street and Mission Road in Overland Park, Kansas, was nearly demolished to make way for a shopping center parking lot. Currently, members of local Daughters of the American Revolution chapters are doing restoration and beautification, with permission from the current owners.

The town of Little Santa Fe was a day’s trip south from Independence in the mid-1800s and a stop on the Santa Fe, Mexico and California trails - you can still see wagon ruts in the New Santa Fe Cemetery at 122th and State Line Road. The town was threatened during the Civil War and the cemetery is Stop 22 on the Battle of Westport self-guided automobile tour.

Though the landscape of the city has changed, obscuring the resting places of our predecessors, by visiting these places and retelling their stories, we enrich our understanding of these histories, nurturing our connection with the land and the people before us.

Want more ideas like this sent straight to your inbox? Sign up for the KCUR Creative Adventure email, and every week we'll tip you off to goings-on around town. 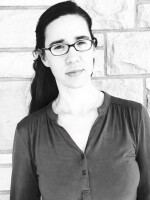 Libby Hanssen
Originally from Indiana, Libby Hanssen covers the performing arts in Kansas City. She's written for KCUR, KC Studio, The Kansas City Star, The Pitch, and KCMetropolis. Libby maintains the culture blog Proust Eats A Sandwich and writes poetry and children's books. Along with degrees in trombone performance, she was a Fellow for the NEA Arts Journalism Institute at Columbia University.
See stories by Libby Hanssen