Mann joined other local Democratic candidates at a watch party on the roof of the Broadway Hotel. Attendees of the watch party maintained an optimistic energy throughout, with cheers filling the room when the results were called around 11 p.m.

After finding out he won, Mann thanked his campaign manager and reiterated his top priorities for office.

“Looking forward to celebrating over the next 24 hours and then come Thursday, it's time to get to work,” he said. “Making sure that education is fully funded, making sure that people have access to healthcare and making sure that workers’ rights are protected.”

In his concession, Musgraves detailed his plans for the night.

“I'm gonna go home and drink some beer,” he said. “And I'm gonna call Mr. Mann, congratulate him. He did very well. I want him to be successful.”

Musgraves said he plans to run for office again. 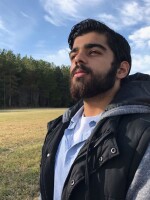