'It's important to change the story and that's what TikTok was doing in raising awareness and educating people because ADHD doesn't present as just one thing.'

Shelby Lewis is a recent alum of the University of Missouri. She spoke about her experience growing up with undiagnosed ADHD and her journey to finally getting diagnosed and treated as an adult.

Shelby Lewis: I hate to say that TikTok was the reason, but it wasn't until I started seeing videos about women in particular being under-diagnosed with ADHD and some of the symptoms that women display that aren't typically associated with ADHD, and I started recognizing those in myself.

But I had a more internalized version and because I always got by really well in school, I just kind of flew under the radar to the point where it's just like, I couldn't keep doing that.

I internalized most of my symptoms. So, to someone who doesn't, I guess, to anyone around me, they wouldn't be able to tell because I got really good at just covering them up or hiding them. And I think that's something that a lot of women do.

"I think TikTok’s a really great platform to reach a larger audience, but I do see the issue with people self-diagnosing off of the things that they see on the internet, but I think it's a bigger opportunity to be aware of the kind of situations that are going on."

So, I think in that regard, someone can seem super, you know, chill or laid back or like they wouldn't have something like this, but years of being undiagnosed allows them to learn how to mask it the best.

ADHD has kind of been told in the single story and that it's, you know – a jittery little boy who just can't sit still and doesn't get good grades – you know, even my mom kind of fell victim to that assumption, which was a bummer, because I went so long without being treated, and the same symptoms just aren't easily recognized in women.

I think that's a bigger issue in general, too. It's just women in the medical field and how they have to advocate for themselves more.

You know, all of these years, I always felt like there was something wrong with me, and I could never quite figure out what it was, and now that I have a handle on it, it makes things so much easier for me, but if I didn't see there was a community already online of women trying to raise awareness and educate people about it, I don't think I would have ever gotten diagnosed.

So, I think it's just important to change the story and that's kind of what TikTok was doing in raising awareness and educating people because ADHD doesn't present as just one thing. There's lots of different, I guess, symptoms that can go into it, and you know, I made straight A's all the time as a kid. So, they thought, you know, surface level – I was fine, everything was fine.

And I just wish that that wasn't one of the biggest indicators of a condition like ADHD because I have had it my whole life and I just was able to mask it pretty well.

I think TikTok’s a really great platform to reach a larger audience, but I do see the issue with people self-diagnosing off of the things that they see on the internet, but I think it's a bigger opportunity to be aware of the kind of situations that are going on and how they present themselves and yeah, people, what they choose to do with that information is up to them. 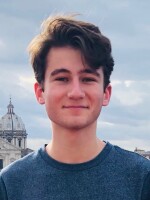 Leor Shomroni
Leor Shomroni is a senior journalism student at the Missouri School of Journalism. He is a student reporter and producer at KBIA, currently working on Missouri Health Talks. He can be reached at ls37b@umsystem.edu.
See stories by Leor Shomroni