Stephan Haynes: “Where there's time there's love. You taste that in the food in Missouri.”

Stephan Haynes spoke with the Missouri on Mic team at the Missouri State Fair last August. He spoke about his relationship to Missouri barbecue and the love that it represents.

Stephan Haynes: It is a small town, big city type of vibe in in Missouri, you know, the south of Missouri is a lot different from the major cities – St. Louis and Kansas City, but it's a beautiful mix. It's a beautiful mix,

I think Missouri is moving in the right direction. Missouri is a red state – nothing wrong with that.

It does have some troubled history – actually Springfield within itself. I remember my friends, they went to most state, and they took me to one of the last places where a recorded hanging was.

So, I know that that sounds a little a little dark, but it is in reference to moving forward – the state within itself unifying and growing in diversity and growing in education, and yeah, I think it's moving in the right direction.

I mean, I hope for a place where my children can be proud. I'm a father of three. They can be proud of the state that is, you know, their home and we continue to grow and unify and you know, create bonds between the North and the South, right?

The different cultures, you know, from the farm towns to the big cities find the unifying a bond between us all.

I think the misconceptions – like my Texas family, oddly enough, as country as they are – think that, you know, it's all just farmland and grassland and, you know, we don't have bustling cities and great entertainment and great food or what have you.

So, it’s a misconception that we are still like trapped in 1800s.

I think Missouri is known for cows, and certainly our barbecue – at least with Kansas City. I mean, hell St. Louis has its own cut of ribs, you know, let's be serious, right?

So we are certainly known for that, which is not a bad thing to be recognized for.

What's on my plate? My plate is Jack Stack. My plate is Gates. My plate is Big T’s barbecue. I mean, it's LC’s! It's just bigger – it’s just filled with so much barbecue and so much love.

It's not just doing something in the fryer and calling it good. You actually have to attend to it and nurture it and it just takes time, and so, you know, where there's time there's love, you know? 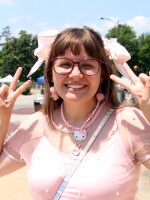 Mack Moore
Mack Moore is a senior at the University of Missouri School of Journalism, and is currently working on KBIA's Missouri on Mic.
See stories by Mack Moore