Views Preview: Is Trump Too Rich To Ignore?

The hunter is being the hunted. Donald Trump is still the clear GOP front runner, at least according to the latest Washington Post-ABC News poll.  But, that same poll suggests six in ten Americans think Trump is not qualified to hold the job. Still, he's getting a ton of media coverage. Is he too rich to ignore?

Gabriel Arana, Huffington Post: “Even the CNN staff is sick of the wall-to-wall Trump coverage”

The Weather Channel is moving away from reality television shows and returning to... weather.

Big cuts are also taking place at the Los Angeles Times -- up to 80 full-time positions accounting for as much as $10 million. The Times is now half as big as it was not all that long ago.

Ricardo Burton, Digiday: "Two-thirds of Wired's revenue is digital, and brand content is why"

The Washington Post is dumping its three live, daily online programs... and rethinking its video strategy.

Rachel Raudenbush, Digiday: “How the Washington Post is pivoting its video strategy”

A court ruling this week may change how companies and individuals handle Fair Use. 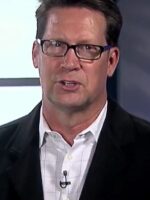 Jim Flink
Jim Flink is the host of Global Journalist, a production of the Reynolds Journalism Institute, and KBIA.
See stories by Jim Flink