Heavy rainfall and swollen rivers have caused major flooding in Missouri and southern Illinois, leading to voluntary evacuations and road closures. The governors of both states have declared a state of emergency, and water levels on the Mississippi River shattered records. While this story is still developing, here are the main things you need to know about the recent floods. 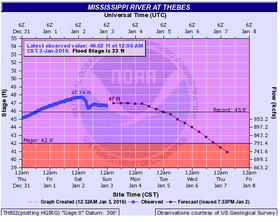 The Mississippi River in Thebes, Illinois broke its previous high water record on Dec. 31 and crested on Jan. 2 at 47.74 feet.  Flood waters from the river covered once visible streets, houses, a playground, cars and a nearby church.

Pastor of the Apostolic Church of Thebes, Jimmie Monahan, said on Wednesday the church’s basement had 4 feet of water.

“I can show you that it’s come up to here in the basement on me,” Monahan said, pointing to his shoulder. “It’s rising pretty close to an hour, an inch an hour. It’s coming up fast.” 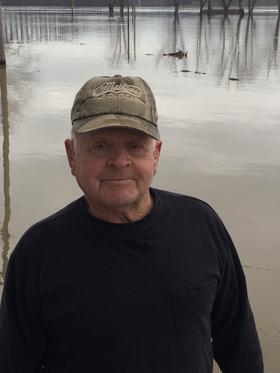 Currently, the Mississippi River at Thebes is beginning to show signs of progress, as the water levels have decreased to 46.82 feet at 2:30 p.m. on Saturday. The National Weather Service is predicting the water levels will recede to 40.9 feet on Jan. 7.

In Cape Girardeau, Missouri, the Mississippi River broke the 1993 high water record on Jan. 1 and set a new record of 48.86 feet on the same day. Water levels have shown signs of slowly falling, and the National Weather Service forecasts water levels will decrease to 40.5 feet by Jan. 7.

Flood waters from the Ohio River in Cairo, Illinois reached 55.82 feet early on Jan. 2, falling well short of the the previous record of 61.7 feet in 2011 when the levee and flood walls around Cairo received a lot of damage. Frank Blakemore from Alexander County Emergency Management said Cairo’s levees are holding up.

“They are holding,” Blakemore said. “They're having a little bit [of] a leakage issue down there, but nothing that can not be controlled. Other than that everything right now is looking pretty good down in Cairo.” 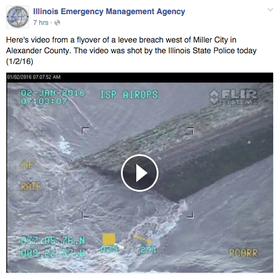 Click here to see video footage from the Illinois State Police of the levee breach west of Miller City in Alexander County.

A State of Emergency

“Widespread flooding and continued rainfall are causing very dangerous conditions across much of central and southern Missouri,” Gov. Nixon said in a press release. “Multiple fatalities due to flash flooding have already been reported, and I urge Missourians in flood-affected areas to stay alert, avoid travel if possible and never drive into a flooded roadway. With more heavy rain expected tonight and tomorrow, state emergency management personnel will be working around the clock to keep Missourians safe.”

On Dec. 29, the governor deployed the Missouri National Guard to act as security in evacuated areas and direct traffic from closed roads. So far, there have been 13 flood related deaths in Missouri.

Gov. Bruce Rauner issued a state disaster proclamation on Dec. 29, 2015 for the counties of Calhoun, Jackson, Jersey, Madison, Monroe, Randolph and St. Clair. The following day five additional counties were included: Alexander, Christian, Clinton, Douglas and Morgan. As a result of the proclamation, all 12 counties impacted by the floods are guaranteed to receive support from the state.

“These counties have significant issues related to flooding that is already occurring or could occur over the next several days,” Gov. Rauner said in a press release. “We are committed to help local responders in these and other impacted counties ensure the safety of people affected by this unusual December flooding.”

MoDOT Southeast reports "Route 177 in Cape County by Kenco is still CLOSED! Please note that the area is still flooded."

As a result of the recent floods there have been numerous road closures and delays across both states.

Don’t see your county listed? Click here to find out which roads or highways are closed in your area.

Don’t see your county listed? Click here to see all of the latest road closures in Illinois.

Here is a list of services and shelters if you’re in need or know someone who is.