$5 Per Tooth Extractions Draw Those Without Affordable Dental Care

After 20 years of selling and using meth, 38-year-old Andy Moss turned his life around. He got off drugs and got a good job. Next step: he wanted to fix his teeth, which had disintegrated, leaving nerves exposed.

Moss, a maintenance man for a roofing company in Fredericktown, Mo, and a father of four boys, doesn’t have insurance. Even at a low-cost clinic that offers sliding scale fees, extractions would have cost him $75 to $120 per tooth. With dentures the total cost would have been close to $7,000.

“There [was] no way possible that I was going to be able to afford to get the teeth pulled and get my dentures,” Moss said.

The pain was so bad he had tried taking leftover antibiotics from his wife and kids and buying pain pills off the street. One time he knocked out his own tooth with a ballpoint pen and a book.

“It was excruciating,” Moss said. “But when I finally got it done it was that sudden tension of 'aaahhh!' And then a release.” 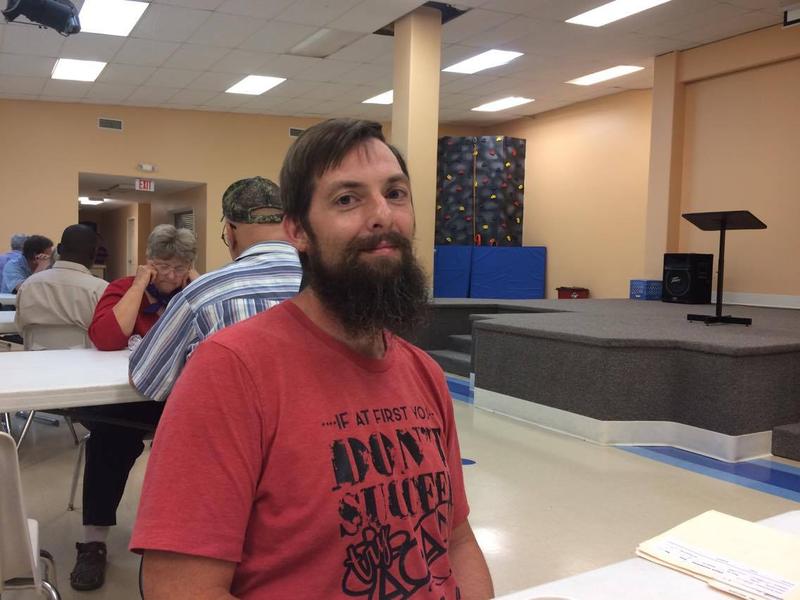 Finally, Moss turned to a charity clinic called Smiles of Hope that offers $5 per tooth extractions, and serves hundreds of patients a year in this part of southeastern Missouri.

In many low-income communities, especially in rural areas, charity clinics like this provide dental care for a population whose needs are not fully met by the existing safety net. If you’re uninsured or an adult on Medicaid, dental care can be hard to find and hard to pay for. Dentists who accept Medicaid are rare in places like rural Southeast Missouri, and clinics that offer low-cost care struggle to meet the need.

At first, Moss wasn’t sure about Smiles of Hope.

“I thought it was going to be like--some guy in a basement with a pair of pliers and you know like it's going to be a real shady kind of an operation,” Moss said.

Instead, Smiles of Hope is a bright, open room in the attic of Lighthouse Church in Dexter, Mo. The volunteer-run clinic opens one Saturday a month, and includes a free breakfast, a screening and triage. They only do dental extractions—$5 per tooth. Plus a $20 registration fee. But for the price, they’ve had patients come from as far as West Virginia to use their service.

The Saturday clinic starts at 5:00 a.m. in the church’s fellowship hall. On a recent Saturday, the room was full of people sipping coffee and waiting for their turn. Patients were asked to fill out paperwork and then led into an office to get a 3-D panoramic image of their teeth.

Upstairs in the clinic, volunteer dentist Dr. William Kane was running triage. He assessed patients’ teeth while an assistant marked which ones will be extracted.

As the morning went on three more volunteer dentists, dental assistants, students and hygienists joined for the main event—the extractions. Each patient was numbed in a dental chair before they were sent into an assembly line of dentists waiting to remove their teeth.

Kane, the co-founder of Smiles of Hope, has been doing this for seven years.

Smiles of Hope plays a unique role in this southeastern corner of Missouri, explains Kane, who also runs a private dentistry practice in Dexter, Mo.

Most Smiles of Hope patients are uninsured or on Medicaid. Without regular preventative care, they often have untreated dental disease that’s reached a point of emergency. 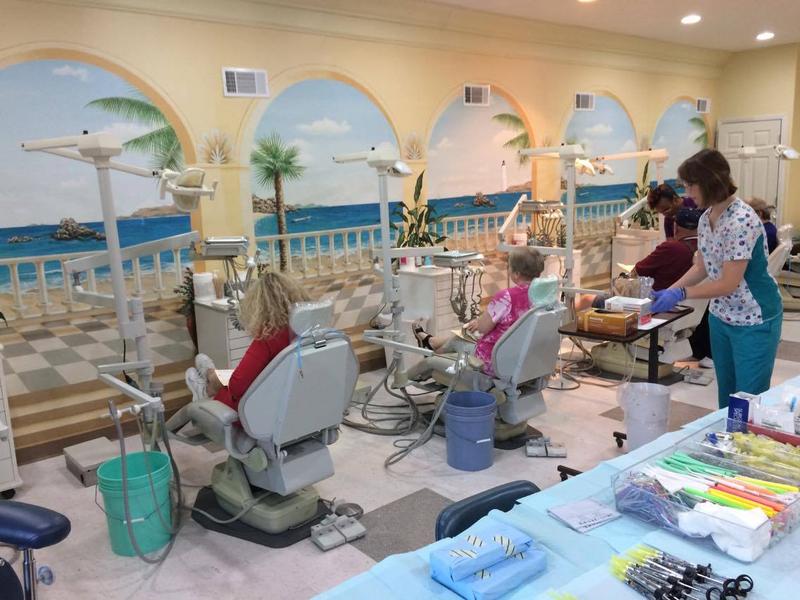 "We're for access to care,” Kane said. “These are the folks who can't for a number of reasons can't find dental care through traditional channels.”

Since the end of 2015 Smiles of Hope has seen 2,023 patients and has extracted 5,581 teeth. They estimate this has saved $2 million for patients without dental coverage.

A shortage of affordable providers

Here in southeastern Missouri, there’s a shortage of dental professionals. It’s especially rare to find a dentist who accepts Medicaid, often the only insurance low-income residents have.

This is a serious deterrent to dentists who might really want to serve their community, he said.

“Some will do it on a very limited basis, you know as a good-will thing," he said. "But you can't have a practice  operate and be in the hole every time you see a patient."

And covering oral health is an optional part of Medicaid. So when states are faced with balancing the budget, oral health services are often the first to go, explained Dr. Jane Grover, the director of the council for advocacy on access and prevention for the American Dental Association.

Though oral health coverage typically makes up only two percent of a state’s Medicaid program, it’s often a “now you see it, now you don’t” benefit, Grover said. In Missouri for instance, Medicaid didn’t cover adult’s dental care until recently, so providers may not think it’s worth investing in the effort to become credentialed.

“Certainly state legislators grapple with these challenges, but for a two percent investment they can save thousands, hundreds of thousands in emergency room use and lost productivity when patients have toothaches and poor oral health,” said Grover.

Grover says one underlying problem is most people aren’t aware of the resources for affordable dental health care that do exist in their communities.

“There are patients that use medical services of a community health center and are completely unaware that there's a dental department there,” Grover said. “Or they may be unaware of the responsibility that health centers have by law to provide emergency and preventative services.”

Federally funded health clinics offer sliding fee scales, based on income and by law they can’t turn anyone away for inability to pay. But many people can’t even afford that reduced price option their income qualifies them for.

The clinics also struggle with a scheduling problem: many patients miss appointments, sometimes for lack of transportation or money for gas, and there’s a long wait to get their next appointment. Sometimes tooth pain just can’t wait.

“Unfortunately, there's not a real great system for patients who fall outside of the ability to pay and I think that's partly why we have such a dental problem in general,” Taylor said. “People don't care to take care of their teeth. Some people were never taught to. And some people just don't have the money for it and so when things finally get bad enough then they go get it taken care of.”

“I see patients who are unable to afford multiple extractions at a time,” Taylor said. “And I will tell them you know we have this opportunity here in a couple of weeks if you can hold on long enough.”

Smiles of Hope lessens the burden of  community clinics trying to meet the needs of those who can’t afford dental care. It worked for Andy Moss. He got his teeth pulled and could still afford to buy dentures.

Getting his teeth fixed meant a lot to Moss. He didn’t want to be judged for the condition of his mouth, for the life he left behind.

“Society looks and the first impressions mean a lot,” he said. “They look and [say] 'man look at this guy. He's some doped up junky. You know look at this mouth.'”

He’s been clean for two and half years and he was chosen to head a men’s substance abuse recovery house through his church. He’s working towards becoming an ordained minister.

“I didn't want my teeth to speak for me,” Moss said. “I wanted to speak for me. And Smiles of Hope has made this a reality that I can actually afford to do this.”

This story was produced as part of a partnership between KRCU and Side Effects Public Media, a news collaborative covering public health.

Why We Leave Out Teeth: America’s Broken Oral Health System

In the current debates over health care, one topic rarely gets mentioned: dental health benefits. That’s because dental health has historically been separated from the rest of medicine. But today, that separation leaves many Americans with no way to prevent or treat debilitating dental health problems.

Author Mary Otto tells the story of the rampant disparities in dental health in the United States and how those play into other disparities of race, class and income in her new book, Teeth: The Story of Beauty, Inequality, and the Struggle for Oral Health in America.

In Missouri, 300,000 Patients' Dental Care Is In Limbo As State Struggles To Fund Coverage

“They were kind of worn down and they were also getting little tears and cavities,” she recalls.

Without dental insurance, McCloskey is on the hook for the full $2,400 cost of the procedure. She was given 18 months to pay it before she gets charged interest. That’ll be hard to do on her fixed income.

In years past she would have had to wait to see the dentist again until she could afford it.