After Delays, Missouri Carries Out Sixth Execution This Year | KBIA

After Delays, Missouri Carries Out Sixth Execution This Year

Late Wednesday, Missouri executed John Middleton, 54, after courts debated whether he was mentally competent as well as claims that he was actually innocent.

According to the Department of Corrections, the execution began at 6:58 p.m. and ended at 7:06 p.m.

"Twenty years ago, John Middleton murdered three people out of fear they would expose him as the drug dealer he was," wrote Attorney General Chris Koster in a statement announcing Middleton's death. "This evening, Mr. Middleton paid the ultimate price for his choices."

Middleton was originally scheduled to be put to death on 12:01 a.m. on Wednesday, but a federal judge halted the procedure an hour before it was set to take place. Middleton was convicted of killing three people to silence those who would inform on a drug ring.

His attorneys say he had severe mental-health issues, compounded by methamphetamine use. 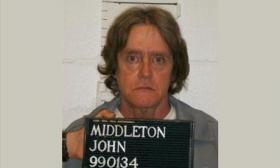 "[Other] inmates indicate that he frequently talks to people who are not there and tells stories that could not have had any basis in reality," Judge Catherine Perry wrote. "Although I recognize that the state, the families of the victims, and the public have a very legitimate interest in seeing executions carried out without unnecessary delay, the public also has a legitimate interest in having constitutional rights of convicted persons upheld."

But an appeals court ordered her stay be removed, saying the claim of mental deficiency should be brought in state court first.

"The district court abused its discretion in granting an indefinite stay of execution," the 8th Circuit panel wrote. "As we said yesterday, Middleton has not presented his current claim to the Missouri courts."

Middleton's attorneys have maintained that Missouri has no clear procedure for arguing such a claim.

"With so much attention devoted to various procedural questions, I worry we have missed the forest for the trees. Missouri is positioned to execute a man who may very well be incompetent. That fact simply cannot be denied or overstated. But, for some reason, that fact has been ignored. It bears repeating: the Eighth Amendment 'prohibits the state from inflicting the penalty of death upon a prisoner who is insane.'"

The courts eventually removed the impediments, and Gov. Jay Nixon denied clemency for the man.

"Alfred Pinegar, Randy Hamilton and Stacey Hodge were murdered in cold blood, their bodies left to be discovered days later," Nixon said. "In separate trials, Missouri juries found that these murders warranted the death penalty. My denial of clemency upholds the jury’s decision to impose that penalty for the murder of Alfred Pinegar."

It was the state's sixth execution this year, despite the inmate's insistence of innocence -- and new evidence that may support those claims.

The state and Middleton agreed that he was a methamphetamine dealer in northern Missouri. But they disagreed on when the murder took place. Pinegar, who was also affiliated with the meth ring, was originally believed to have been killed on June 23, 1995. The state arrived at that claim through forensic analysis by a bug expert who examined larvae on the body.

But, looking at new evidence this year, that expert now says the murder most likely occurred a day later, on June 24. Middleton was locked in a jail cell in Iowa on that day. 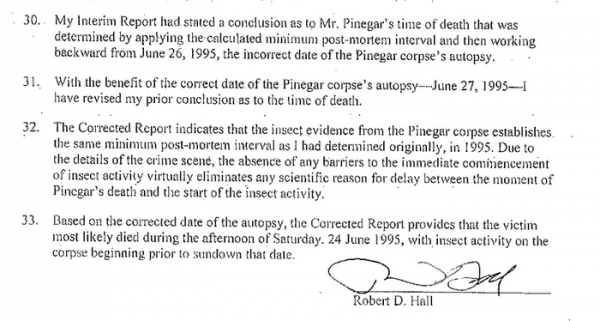 "He didn't just change his conclusion," said Kay Parish, Middleton's attorney. "He re-did all the work he had done back in 1995 and 1996 before he came to the conclusion that he has come to. [Middleton] has an iron-clad alibi."

In addition to the evidence from the bug expert, a new witness has stepped forward. The witness says two men who were not Middleton took him to Pinegar's body and took responsibility for the murder. Although his identity is in court records, Middleton's attorneys have asked that the witness not be named due to fear of reprisal.

"They thought I was a snitch and brought me to the body to show me what they would do to me if I talked about their meth business," the witness said in a written affidavit. "By now I could see the body next to the fence was a mess, covered in blood. It was dead."

The witness said the men beat him with a baseball bat and told him "here's already been three people killed" and asked if he wanted to be the fourth.

The three people killed refers to Pinegar and two others killed in relation to this meth ring. Middleton was convicted of all three murders, but his attorneys say the new evidence shows law enforcement allowed the investigation to be led astray by the two men who beat the witness. Middleton's lawyers say those men are the actual killers.

"Part of the reason we don't execute people with mental deficits is that they have more difficulty navigating the system," Parish said. "And I think that's very true in this case, and I think that's why he had trouble in the past in getting lawyers or anyone to listen to his claim of innocence or look at this evidence."

The state, however, maintains that the new evidence was without merit and that the murder took place on June 23, despite the expert's new testimony.

Parish said the new evidence did not surface until recently due to Middleton's ineffective counsel at his trial.

His attorneys had asked federal courts and Nixon to step in and examine the case further, but to no avail.

"My client, all along, has said he is innocent of this," Parish said. "Regardless of how you feel about the death penalty, based on this new evidence, there is a lot of reason to doubt that the court got the right result in this case. And if there's any reason to doubt, we should not be executing this man."

Middleton was the eighth inmate executed since November last year, when the state ramped up its efforts to clear death row. With the exception of one month, the state has carried out one execution every month. The one inmate who has been temporarily spared will have a hearing in September over concerns that his medical condition would put him through a painful execution.

Missouri Attorney General Chris Koster is asking an appeals court to overturn a stay of execution for John Middleton, scheduled to die early Wednesday for killing three people in northern Missouri in 1995.

The Missouri Supreme Court has set an Aug. 6 execution for a St. Louis area man convicted of raping and killing a neighbor nearly two decades ago.

Missouri carried out another execution early Wednesday. It was the state's fifth this year, and the nation's second since Oklahoma botched an execution in April.

According to a state official, Winfield was pronounced dead at 12:10 a.m.

Inmate John Winfield is scheduled to be executed on June 18 for murdering two people in St. Louis County in 1996. His lawyer, Joe Luby, argued in the Cole County 19th Judicial Circuit Court that the Missouri Department of Corrections is violating the sunshine law by keeping secret the identity of the supplier of the execution drug.

Two suits were filed Thursday in Jefferson City challenging Missouri officials for failing to disclose information about the drugs the state uses in lethal injections.