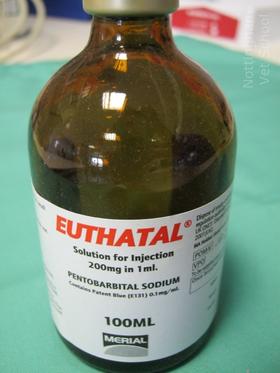 Last summer, the Apothecary Shoppe also offered to supply the execution drug to Louisiana. The pharmacy is not licensed there as well.

The pharmacy supplying Missouri with its execution drug has been criticized for several reasons: 1) for supplying to a state where it isn't licensed; 2) for making a drug that is essentially a copy of a manufactured drug (not allowed for compounding pharmacies); and 3) for relying on a controversial testing laboratory to verify the drug's effectiveness.

In a statement, the American Civil Liberties Union of Missouri said it would be a "positive step" for the Apothecary Shoppe to become licensed in Missouri.

"It would be an improvement from the legally questionable procedure of handing over a controlled substance to an individual who is not the patient or a medical professional to secretly courier the drug into Missouri," legal director Tony Rothert said. "It might allow the public to finally learn whether we can trust the quality of the drugs Missouri is using."

Missouri has pointed to an anonymous testing lab's reports to argue that the drug is potent and pure. The lab is Analytical Research Laboratories in Oklahoma City, OK; it had approved a batch of steroids for commercial use that ended up killing dozens in 2012. The deaths were an impetus behind recent congressional action on the regulatory practices for compounding pharmacies.

The Apothecary Shoppe has been cited in the past as well: one disciplinary action in 2006 and several warnings from the Oklahoma Board of Pharmacy.

The warnings are for a few different deficiencies, one of which is creating a drug that is essentially a copy of an FDA-approved drug.

The board took disciplinary action in 2006, finding head pharmacist and owner Deril Lees guilty of increasing the quantity of drugs dispensed. According to the Board of Pharmacy, "The staff pharmacists were also instructed to shred the original prescriptions."

In court filings over the past few months, Missouri has argued that the identity of the supplier must be kept secret. The Department of Corrections changed the protocol to hide the identity, a move Gov. Jay Nixon and Attorney General Chris Koster both supported.

The state has argued that if the Apothecary Shoppe's identity got out, the pharmacy wouldn't want to supply for executions anymore. The Apothecary Shoppe did not respond to a request for comment on whether or not they intend to continue.

Missouri's next execution is scheduled for Feb. 26.

Late Friday night, a group of federal judges found that the compounding pharmacy making Missouri's execution drug can remain secret, but new emails point to one pharmacy as the likely supplier.

Inmates' Lawyers Ask Mo. Board Of Pharmacy To Act Before Execution

Lawyers representing death row inmates have filed a complaint with the Missouri Board of Pharmacy, citing St. Louis Public Radio and the Beacon’s investigation from earlier this week.

A federal judge in Missouri has denied a motion to grant a 60-day stay of execution for convicted killer Herbert Smulls.

The attorney for Missouri death row inmate Herbert Smulls, scheduled to die by injection on Jan. 29, has asked a federal court for a 60-day stay of execution over concerns about the execution drug.

Attorney Cheryl Pilate filed the motion for a stay on Tuesday with U.S. District Court in Jefferson City. A spokeswoman for Attorney General Chris Koster says the state will respond by Friday, but otherwise declined comment.

Death penalty opponents are using the 25th anniversary of Missouri's resumption of capital punishment to highlight their desire to halt executions.

George Mercer was executed on Jan. 6, 1989, for the 1978 rape and slaying of waitress Karen Keeten in the Kansas City area. Mercer's execution was Missouri's first after a nationwide moratorium on capital punishment was lifted in 1976.

Since then, Missouri has executed 70 inmates.