An attorney for the Michael Brown family is calling the grand jury process in the Darren Wilson case "unfair." 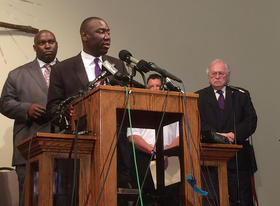 Speaking on ABC’s This Week, Benjamin Crump said that St. Louis County prosecutors should recommend that the grand jury indict Darren Wilson for the death of Michael Brown, instead of leaving the decision entirely in the grand jury’s hands.

ABC legal affairs anchor Dan Abrams interjected, saying that it is not uncommon for prosecutors to omit a recommendation in high-profile cases.

The two spoke over each other multiple times, arguing over evidence and witnesses, but Crump was allowed the last word.

When asked about the possibility of the evidence showing that Brown was running towards Wilson when he was fatally shot, Crump pointed to the disparity between witness accounts and police reports.

“So if you got that tipping scale, then (there is) probable cause,” Crump said. “It should go to a jury where it’s transparent and we have a trial by jury.”