On Chess: A look at the Tradewise Gilbraltar Open 2017 contest

The Tradewise Gibraltar Open is considered one of the strongest open tournaments in the world. The 2017 tournament was held Jan. 24 through Feb. 2 with an exceptionally strong pool of players, including super Grandmasters Fabiano Caruana of St. Louis, as well as Maxime Vachier-Lagrave, Hikaru Nakamura Mickey Adams and many more.

The 2017 tournament drew lots of attention because of the field of players, the drama and the unlikely outcome of American GM Hikaru Nakamura, who won for a third time.

In the last round, GM Hou Yifan showed up 25 minutes late and lost her match in just five moves, in what by all accounts was a protest. GM Hou Yifan didn’t agree with her pairings during the tournament, as she was paired against seven female players in her nine games and was under the impression that the pairings were arranged that way.

The organizers strongly denied this claim and carefully checked her pairings with the arbiters, finding the pairings to be correct and unintentional. For approximately 10-15 minutes, it was difficult for players to concentrate because so many people were walking around to look at Hou Yifan’s board and her unusual final position. 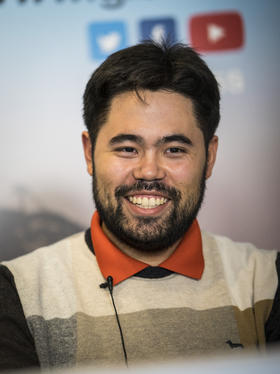 Although GM Hikaru Nakamura had won the Gibraltar Open the last two years, no one expected him to be able to pull off a third year in a row. Nakamura was half a point behind GM Anton Guijarro David going into the final round; however, GM Anton Guijarro David drew his final game while Nakamura managed to win a complicated game with the black pieces against GM Edouard Romain.

After ten rounds, three players remained with eight points out of ten and they had to play a tie break to decide the winner: David, Nakamura, and GM Yu Yangyi. David had a bye in the first round of tie breaks, which left Nakamura to face Yangyi. Nakamura managed to defeat Yangyi in a blitz playoff and went to the finals to face David. Miraculously, Nakamura managed to defeat his opponent 1.5 - .5, becoming the 2017 Tradewise Gibraltar Open Champion.

It is a really exceptional achievement to win such a prestigious (and strong) tournament for three years in a row — the American continues to prove he is one of the best.

Within his first three years in the U.S., ​Varuzhan Akobian had been awarded the prestigious Samford Chess Fellowship, tied for first in the 2002 World Open, won the Irme Koenig GM Invitational and dominated the 2003 U.S. Junior Closed Championship after winning his first seven games. He was warded the GM title in June 2004, after which he clinched another  World Open with a sparkling win against Alexander Shabalov. Akobian is in frequent  rotation as the Resident Grandmaster at the Chess Club and Scholastic Center of Saint Louis, and his best accomplishment is as the U.S. Championship runner-up in 2014.