On Chess: Summer of chess ends and ushers in next strong classic tournament

It has been an extremely hectic “Summer of Chess” for the Chess Club and Scholastic Center of Saint Louis, starting way back in mid-June with live commentary of Paris/Leuven and finishing strong in August with the Saint Louis Rapid and Blitz, featuring the all-mighty Garry Kasparov and an astonishing performance by Armenia's Levon Aronian.

As things cool down from these events, the club takes a small respite before organizing another important event.

With schools resuming around the country, it is a perfect time for the third Strong Chess Classic, the series of chess tournaments geared towards not-yet-elite grandmasters that are used for training and practice. I've had the pleasure of inviting the field, and I'd like to go through the thought process that goes into organizing an event like this.

Primarily, one must remember the purpose of these events. The main goal is for the Strong Classic tournaments to provide a platform for the U.S. Women's Olympic team, aspiring members of the U.S. Olympic team, and collegiate players around the country to improve and measure themselves against top quality players from around the World. Having many countries represented is a must when considering who to invite. From the U.S. Women's Olympic team, we will have Tatev Abrahamyan, without a doubt the strongest woman player in America who has yet to gain the U.S. Championship title. From the aspiring members of the U.S. Olympic team, we have Awonder Liang and Daniel Naroditsky. Awonder is America's youngest grandmaster, while Daniel is a few dozen rating points away from being a member of the Olympic squad. 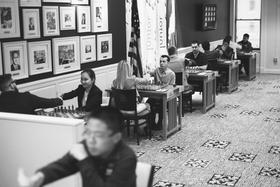 The collegiate scene is again well represented. From universities around St. Louis, we have Aleksandr Shimanov from Webster University and Dariusz Swiercz and Yaro Zherebukh from Saint Louis University. Choosing players from the rest of the world to participate in the event is the difficult part. Thanks to the previous two editions, the tournament series has become incredibly popular, with players asking for a spot on the next event months in advance.

As mentioned in previous articles, tournaments of this strength, for grand masters who are not yet in the top-50, are quite rare, and players seek these types of opportunities to play. One of the most interesting players in the field certainly is Ju Wenjun, from China. She is a former Women's World Champion and the second strongest female player on the planet, rating just behind her compatriot, Hou Yifan. This will be Wenjun's first time in St. Louis, a young woman who is already a superstar.

Some familiar faces for American chess will be making a return. The winner of the 2017 World Open, Tigran Petrosian, named after the former World Chess Champion, will be traveling from far-away Armenia to compete in this event. Georg Meier, former European Team Champion with Germany and a former participant in American collegiate events, will also be making a return. To make this event truly world wide, will be Alan Pichot from Buenos Aires. A member of Argentina's Olympic team and an ambitious and young player, he will certainly be looking to fight for the first spots.

This event certainly will not garner the attention that the World Cup, soon to be held in Tbilisi, Georgia, will accrue, but it is an important stepping stone for many of these players. When Awonder Liang or Tatev Abrahamyan accumulate future successes, they will be looking back at these events as one of the catalysts to where they land.

The tournament begins at the CCSCSL on Sept. 6 and runs until Sept. 14 with daily rounds at 1 p.m. Information will be updated at www.uschesschamps.com

Alejandro Ramirez earned his grandmaster title by the age of 15. That achievement set Ramirez as the first Centro-American to earn the elite GM title. Ramirez is the new coach of the Saint Louis University Chess Team and a regular live broadcast commentator, in both English and Spanish, for the Chess Club and Scholastic Center of Saint Louis.