Kris Kobach lost his 2004 bid for Congress to Democrat Dennis Moore by a hefty margin — nearly 12 percentage points in a district that went Republican a few years later.

“It stopped his progress dead in the water,” recalls Martin Hamburger, who created a 2004 ad that hammered Kobach on that front. 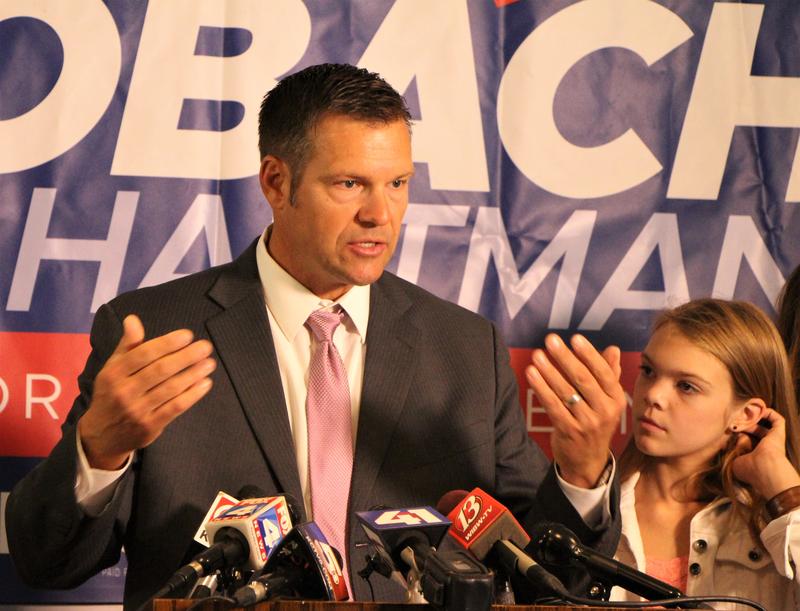 In the TV ad, scored with ominous music, a deep voice intones: “Why are Kansans turning from Kris Kobach?”

Kobach and Moore tore at each other over that ad on a debate stage that fall. Kobach accused the incumbent of stooping to “politics of personal destruction.”

“This isn’t about personality,” Moore retorted. “It’s about judgment. It’s about people we choose to take money from and associate with.”

You can watch their debate — which included replaying that TV ad for the debate audience — on YouTube. Skip to about 35 minutes in.

As Kobach heads into the general election for governor, he’s facing the same allegations.

This month, The Topeka Capital-Journal reported concerns from GOP consultants that his campaign is employing three white nationalists.

Meanwhile, a small but vocal PAC called Kobach is Wrong for Kansas stops short of calling him racist, but argues he associates with, and benefits from, groups with white supremacist sympathies.

“He’s unrelenting in his willingness to accept support from people who share harmful ideas,” says Zachary Mueller, the group’s researcher.

In a recent interview with the Kansas News Service, Kobach dismissed the PAC’s criticisms. He accuses his opponents of engaging in a “Kevin Bacon game” to link him by several degrees of separation to racist ideologies.

“It’s just a stupid argument,” he said, and on a personal level, it’s “hurtful.”

“I believe we are all God’s children,” he said. “We are all created equal.”

So what are the allegations against Kobach? They run the gamut, but here are two that have been independently reported by local and national news outlets over the years.

According to The New York Times, The Kansas City Star and ProPublica, for years, Kobach did legal work sponsored by John Tanton’s organization, the Federation for American Immigration Reform.

His work focused on anti-illegal immigration initiatives, such as trying to get Kansas colleges to charge students out-of-state tuition if the students aren’t in the U.S. legally.

Tanton — according to the Times — wanted to convince white people they needed to stop the U.S. from changing demographically, and republished a racist French novel about hordes of refugees and “the end of the white world.”

Kobach earned more than $125,000 from Tanton’s group and received thousands more in campaign contributions from a PAC run by Tanton’s wife.

Kobach’s critics also point to other co-appearances, collaborations or hat-tips that they say link Kobach to racists and Holocaust deniers. Among these is a column Kobach wrote for the radically conservative Breitbart website arguing illegal immigrants commit more crime than U.S. citizens — despite, according to experts, a lack of evidence.

Kobach leaned in part on writing by Peter Gemma, whom the Anti-Defamation League calls a racist. In 2005, the Washington Post reported Gemma was working with a white supremacist group opposed to white people mixing with other races, and that he held a speaking event for high-profile Holocaust denier David Irving.

Celia Llopis-Jepsen is a reporter for the Kansas News Service, a collaboration of KCUR, Kansas Public Radio, KMUW and High Plains Public Radio covering health, education and politics. You can reach her on Twitter @Celia_LJ.