Missouri conservationists will hold a festival Saturday at the U.S. Department of Energy’s Weldon Spring Site in St. Charles to ask gardeners to help boost the declining population of Monarch butterflies.

Researchers say the population of the iconic butterflies has declined by 80 percent since the late 1990s, largely due to the loss of their habitats. 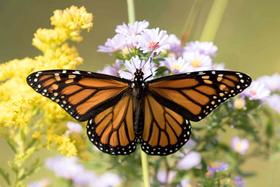 Weldon Spring, which is best known as a federally managed nuclear waste site, now has a thriving native prairie garden that attracts Monarchs, said Bob Lee of Missourians for Monarchs, which is organizing the Monarch Madness festival.

“The purpose of the festival is to reinforce an awareness about a problem that really does not need to exist,’’ Lee said. “Lack of habitat can be overcome.”

Conservationists in Missouri have been working in recent years to encourage gardeners and city and state parks to plant milkweed, which Monarchs need to lay their eggs, Lee said. Monarchs migrate to the United States in spring and summer but winter in Mexico.

Gardeners will be on hand at the site’s interpretive center to offer tips for planting gardens to attract Monarchs and other pollinating insects and birds, Lee said.

Children will be able to catch and tag Monarchs – if the butterflies show up on Saturday, Lee said.

“It is just going to be, hopefully, a very fun day and learning experience from which we hope people will become involved,’’ Lee said.