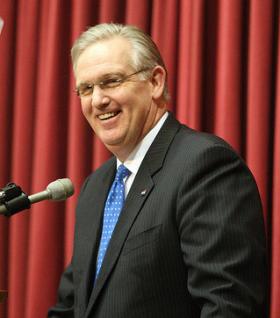 Who should have the power over the Missouri budget? The legislature, which writes the budget? Or the governor who is constitutionally required to balance it?

The latest salvo in the ongoing battle between Missouri's Democratic governor and the Republican-led legislature over the state budget is Amendment 10 on the November ballot.

Constitutional Amendment 10 would limit the governor's budgetary authority. Specifically, it would limit his ability to withhold money temporarily from the budget each year.

In addition to limiting the governor's withholding authority, Amendment 10 would also bar the governor from estimating revenue based on projections from legislation that has not yet passed, and from reducing "any appropriation for the payment of principal and interest on the public debt."

The governor would also have to issue a proclamation to the House or Senate whenever he "reduces ... appropriations as a result of actual revenues being less than the revenue estimates."  The House or Senate, depending on which chamber a spending item originated in, would then have the authority to override the governor's spending cut and could do so at "any time the general assembly is in session."

Origins of the amendment

Amendment 10 was created by the passage earlier this year of House Joint Resolution 72, the subject of heated debate in the Missouri House. Democrats viewed it as an attack on Gov. Jay Nixon for his long track record of withholding money from the state budget every year.

State Rep. Chris Kelly, D-Columbia, told fellow House members earlier this year that he, too, was frustrated with the governor over his numerous withholds. But Kelly said that amending the constitution to stop Nixon would make it harder to produce a balanced budget -- which the governor has to do.

"The way that we (would) weaken a balanced budget is that the legislature (could) simply override withholdings and force an unbalanced budget," Kelly said.  "That, over time, is a bad path to go down."

Kelly also called the amendment a permanent solution to a temporary problem, citing Nixon's eventual departure from the governor's office in January 2017.

The sponsor, state Rep. Todd Richardson, R-Poplar Bluff, disagreed.  He said the amendment would allow the legislature to have a role whenever any Missouri governor oversteps his or her bounds.

"Nothing in House Joint Resolution 72 prohibits, prevents, or restricts the governor's ability to withhold money when there is a financial justification for doing so…not one thing," Richardson said.

Therein lies the issue. Republican lawmakers and the Democratic governor have been fighting for years over whether those withholds are justified. Nixon has withheld money from the state budget every year he's been in office, choosing to release it later on whenever incoming budget revenue improved. He has accused GOP leaders, both this year and in years past, of sending him unbalanced budgets that he had to fix. Republican leaders, in turn, accuse him of withholding money from the budget as punishment for their questioning his budget projections or his agenda.

It's obviously no surprise that Nixon's opposed to Amendment 10.

"I don't think it's the right policy to limit the power of the chief executive," Nixon said during a recent stop in St. Louis County. "I don't think amending the (state) constitution to lessen the fiscal strength that has been mentioned literally in each of our AAA bond documents as a needed strength and has been used by governors for generations in Missouri to maintain that fiscal balance, but we'll let Missourians speak on that…I will be voting 'no.'"

Meanwhile, Amendment 10's supporters outside of the Missouri Capitol hallways are spending lots of money on commercials attacking Nixon's handling of the state's economy.  The following is taken from a TV ad by the group Missouri Club for Growth and their chairwoman Bev Randles:

"As a resident of Kansas City, Mo., I want the best for our area's children.  So it's appalling that Gov. Jay Nixon repeatedly withholds education dollars from our local schools, especially when they're working so hard to regain full accreditation…That's failed leadership, and it needs to stop…by voting 'yes' on Amendment 10, it will stop."

The group has a separate political action committee that's backed by wealthy financier Rex Sinquefield. So far, the Club for Growth PAC has raised $2.17 million for Amendment 10 – and that includes a single contribution of $1.2 million from Sinquefield alone, dated Sept. 12. 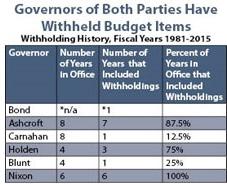 Newspapers have begun weighing in on Amendment 10 – the St. Louis Post-Dispatch, the Kansas City Star, the Columbia Tribune, and the Joplin Globe all oppose it.

In addition, the Missouri Budget Project, a group that advocates for low-income residents, says the measure would further politicize the process of balancing the budget. The group also says several governors before Nixon have withheld money from the state budget, including Republicans Kit Bond, John Ashcroft, and Matt Blunt.

FERGUSON, Mo. (AP) — Missouri Gov. Jay Nixon says he will create an independent commission to study issues that have surfaced since the fatal police shooting of Michael Brown in Ferguson.

Four newly appointed Missouri Lottery Commission members say they want to make the agency more efficient so that more of its proceeds can go to education.