After a Sunday night marked by violence in Ferguson,  Monday brought with it an emergency declaration in St. Louis County, dozens arrested at a protest at the federal courthouse, comments from U.S. Attorney General Loretta Lynch and a temporary shut-down of Interstate 70. Monday night, some were arrested in Ferguson but there was no gunfire or property damage.

St. Louis County Executive Steve Stenger on Monday issued a state of emergency throughout the county. The declaration effectively gives the county executive the power to give orders to the county police department, and it gives county police authority to to lead security efforts in Ferguson.

St. Louis County’s Police Department is controlled by an independent board, and the county executive has very little day-to-day control over its proceedings.

The declaration followed shootings late Sunday in Ferguson. Police said two groups were firing at each other near where protesters were gathered on West Florissant. Officers shot Tyrone Harris after they saw him firing a gun, police said.

On Monday, Harris remained in critical condition at a hospital. Harris was charged with four counts of assault on law enforcement in the first degree, five counts of armed criminal action, and one count of discharging or shooting a firearm at a motor vehicle.

On Monday afternoon, Stenger issued an executive order declaring a state of emergency “as a result of the criminal unrest in and around the City of Ferguson in St. Louis County.” It stipulates that St. Louis County Police shall take over the operations of police emergency management in the City of Ferguson, and the surrounding areas “as may be necessary.” And it specifically gives St. Louis County Police Chief Jon Belmar the power to “exercise all powers and duties necessary to preserve order, prevent crimes, and protect the life and property of our citizens.”

“What we saw last night spiraled completely out of control,” Stenger said in a telephone interview. “The Ferguson Police Department had control last night and it did not work out like it needed to. We saw acts of violence and we just can’t have that.”

Stenger said he wanted to be proactive.

"When I saw the events go out of control last night, what ran through my mind were the conversations that I’ve had with the local businessowners," Stenger said. "And I know just how hard they worked to put their businesses back together after they were destroyed last August and after. So, it was extremely important to me that we do everything we can to protect their interests, their businesses, and to protect their lives as well."

Stenger says the county police department have what it takes to handle a volatile situation. He says the department performed “professionally and restrained” last night, especially when county officers were involved in a police-involved shooting.

"We saw acts of violence and we just can’t have that. We can’t have that in county. Our community’s gone through far too much and we can’t go through anymore more of it," Stenger said. "So tonight we’re going to take a proactive approach and we’re not going to be tolerating any lawlessness."

Monday evening protesters joined hands and blocked traffic across both the eastbound and westbound lanes of Interstate 70 near the Blanchette Bridge.

During the shutdown a vehicle broke through the line of protesters but no injuries were immediately reported. 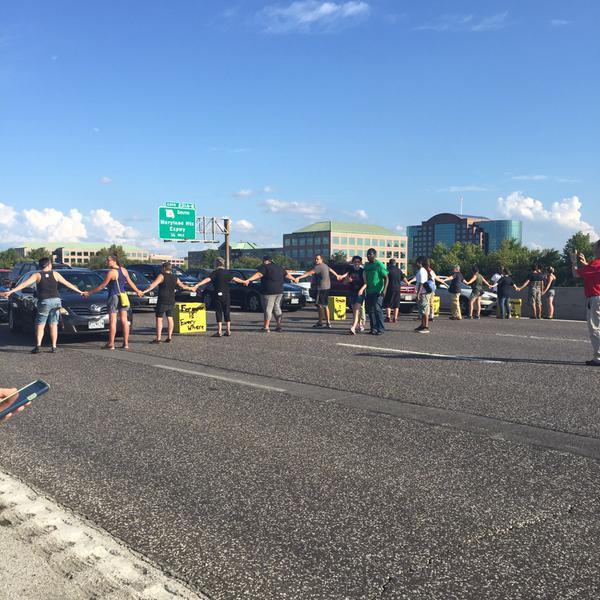 Arrests made during 'Moral Monday' protest at Federal Courthouse

Prior to the declaration of the state of emergency, between 100 and 200 people marched from Christ Church Cathedral to the Thomas Eagleton Federal Courthouse located off of 10th St. in downtown St. Louis.

Dozens were arrested after protesters climbed the temporary barriers surrounding the courthouse. In an emailed statement U.S. Attorney Richard Callahan's office said that 57 protesters were arrested for "obstructing the normal use of the entrances to the Thomas Eagleton Federal Courthouse." The arrested are being released on a summons. Callahan also said that the protest was "otherwise peaceful and nonviolent."

The protesters had the initial goal of delivering a list of demands to the Department of Justice. The demands focused on law enforcement reform.

Officers with the Department of Homeland Security and the St. Louis Metropolitan Police Department were on the scene.

Speaking in Pittsburgh Monday, U.S. Attorney General Loretta Lynch addressed a convention of the national Fraternal Order of Police. The Order is a union that represents officers in departments across the United States.

As reported by the Pittsburgh Post-Gazette Monday Lynch "strongly condemned" the violence in her remarks:

"I strongly condemn the violence that was perpetrated against the community, including the police officers, in Ferguson last evening," Ms. Lynch said, prompting applause from the crowd of officers gathered inside the David L. Lawrence Convention Center, Downtown.

"As we have all seen over recent months and years, not only does violence obscure any message of peaceful protest, it places the community, as well as the officers who are seeking to protect it, in harm's way," Ms. Lynch said. "This weekend's events were peaceful and promoted a message of reconciliation and healing, joined by law enforcement. But incidents of violence such as we saw last night are contrary to both that message along with everything that all of us, including this group, have worked so hard to achieve over the past year."