Eavesdropping on bees could help scientists save pollinators

A buzzing bee may not sound like much to most people but to bee scientists, there’s a lot to learn from the noises bees make when they fly and pollinate flowers.

On Wednesday, researchers at Webster University, Lincoln University and the University of Missouri-Columbia released a study in the journal PLOS One that concludes that recording bees can help track pollinator activity. That could provide scientists with data to aid conservation of species that have experienced falling populations.

Declines in pollinating species have alarmed scientists, environmentalists and policymakers, since many crops depend on native wild bees.

Some specialize in particular flowers, such as those that come with squash and cherry tomatoes.

Recordings of bees can reveal physical characteristics that are connected to how well species can pollinate flowers in the area.

“You can actually hear a difference in pitch and frequency,” said Nicole Miller-Struttman, a biologist at Webster University. “It’s actually related to their body size and tongue length.”

To record the bees, researchers used an iPod mini and plugged in a microphone. They also developed an algorithm that helped isolate the sound of the buzzing from surrounding noises in the environment. They recorded two bee species, bombus sylvicola, the forest bumblebee and bombus balteatus, the golden-belted bumble bee. 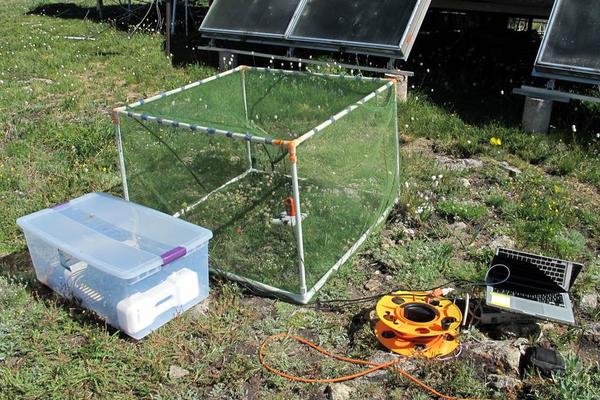 Typically, scientists have to catch bees with nets and essentially remove them from the population in order to assess population levels. Taping the bees, Struttman said, is less costly and less damaging to bee numbers.

Gerardo Camilo, a pollinator biologist at Saint Louis University, has sampled bees at many community gardens in the St. Louis area. He said he’d like to see the recording method tested among a larger variety of bee species and environments.

“This paper is an excellent first step in the application of acoustics to bee diversity, and most impressively, to pollination services,” Camilo wrote in an email. “The applicability, and thus the success, depends on having a large ‘buzz’ library, developing a central repository of many bumble bee species recordings, each species under a range of conditions, [such as] prairie, farms, gardens, urban, etc.”

In the future, researchers hope to refine their method so they can distinguish what species was being recorded. They also plan to develop a smartphone app that records and snaps photos of bees so that farmers and gardeners can track pollinators.

“If [a farmer] knows for their blueberries they really need to have more bees than they currently have, then they might get some commercial bumblebees,” said Miller-Struttman.