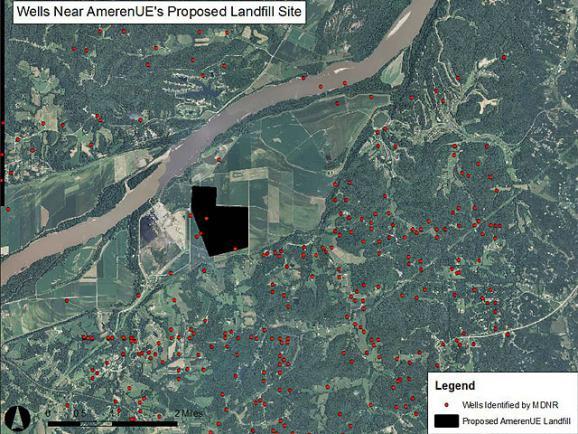 The Sierra Club and Labadie Environmental Organization submitted a letter to the Missouri Department of Natural Resources on Thursday asking the state not to allow Ameren to build new coal ash landfills before testing groundwater for contamination.

“Unless you know what exists today, you’ll never be able to know whether the new landfills would be leaking, because whatever comes out of the landfill is going to be the same kind of contamination that’s probably already coming out of the ash ponds,” Lipeles said.

Lipeles says many of the people who live near the Labadie, Meramec, and Rush Island plants get their drinking water from groundwater wells.

Coal ash contains toxic substances like arsenic and lead, and a number of Ameren’s coal ash ponds in Missouri and Illinois are known to be leaking.

In response to our request for comment, Ameren provided the following:

“Although our existing permits at our Labadie Energy Center do not require groundwater monitoring, Ameren Missouri has installed monitoring wells on our plant property that reflect compliance with state and federal requirements. Going forward, we will comply with groundwater monitoring requirements by the Missouri Department of Natural Resources as part of the National Point Discharge Elimination System (NPDES) permit for our ash ponds.”

“This letter is written out of frustration,” Lipeles said.

"The problem with using those permits is that all the permits for these facilities are out of date,” Lipeles said. “The one for Labadie has been expired since 1999.”

But so far, Lipeles says state regulators haven’t followed through on either option.

A spokesperson for the Missouri Department of Natural Resources said the agency had received the letter and intends to review it.

Updated Wednesday, May 22, 5:30 p.m.: The Department of Health & Senior Services is also posting its evaluations of the air monitoring data here. The regulatory standards that DHSS is using to estimate the health risks from landfill fumes are here.

The Boone County Sheriff’s Department collected almost 650 pounds of prescription drugs from drop-off locations around Boone County in a drug pick-up event this past weekend … and the sheriff’s department reports there is an increase in people dropping off prescriptions for environmental reasons.

The end of a lead-laced era: polluting smelter to close after 120 years

Herculaneum, Mo., a small town on the bluffs above the Mississippi River, was always a company town.  The company, Doe Run, is the largest lead producer in North America, trucking in lead from Missouri's rich mines to a 120-year-old smelter on the river.  For 25 years, the smelter didn't meet federal air standards for lead, and now, after decades of battling government regulators and angry parents, Doe Run is leaving town at the end of next year.

Ameren’s coal-fired power plant in Labadie is among the top ten greenhouse gas emitters in the country. That’s according to data released today [on Wednesday] by the U.S. Environmental Protection Agency. Véronique LaCapra reports, from St. Louis.