A federal judge has stayed Missouri's upcoming execution over concerns that the Department of Corrections obstructed the clemency process.

Inmate John Winfield was scheduled to be put to death on June 18 for killing two people in St. Louis County. Before an execution can occur in Missouri, the governor must first make a decision on clemency -- whether or not the inmate's life should be spared. 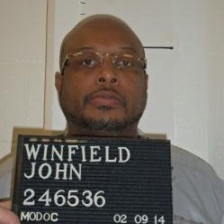 In her order Thursday, federal Judge Catherine Perry of the Eastern District said it was likely that the state intimidated a correctional officer so that he wouldn't provide support for the clemency request.

In mid-May, one of Winfield's supervisors, a correctional officer who has worked above him for five years, agreed to support his request for clemency. According to court records, officer Terry Cole spoke to his superiors at the Potosi Correctional Center and asked about the prison's policy on clemency.

"[The Potosi supervisor] told him that it is up to the individual employee," the record shows. "She told him that if he did speak to counsel or write a letter, he should be sure that it was clear he was expressing his own opinion and was not speaking for the Department of Corrections."

Cole signed a statement that Winfield is in the "elite 1 percent of all inmates," that he is a compassionate man who can mentor young inmates and who has the respect of prison staff. Cole said that he didn't disagree with the death penalty, but that he didn't think it was appropriate for Winfield.

But a few days after Potosi supervisors told Cole he could support the petition, Cole was informed that he was under investigation for "over familiarity" with an inmate.

Cole then sent a text message to Winfield's attorneys, saying he couldn't support the clemency petition.

The investigation into Cole concluded in June, with the allegations deemed unfounded. But Cole said at a hearing "that he no longer wants to provide a letter or support for Winfield’s request for clemency."

"He's frightened half to death," Joe Luby, Winfield's attorney said in an interview. "There needs to be an outlet, there needs to be some way in which the government can extend mercy or fix cases that are fundamentally wrong."

Luby asked Perry to halt the execution while a full trial can get to the bottom of the issue, and Perry granted it.

"The evidence presented to me shows that Winfield is likely to be able to prove at a later trial that prison officials took actions to intimidate Cole to keep him from providing support for Winfield’s clemency petition," Perry wrote. "Cole denies being threatened, although his demeanor, and the recording of his interview with Wilson, shows that he was intimidated and feared for his job."

You can read the judge's full order, or click on "Notes" for the important parts.

The state, however, contended that the investigation was into an unrelated prison issue. The judge was not persuaded by that argument.

"Although [the state contends] that it was just a coincidence that he performed his investigation the day after the department learned that Cole had been in contact with Winfield’s lawyers, it is likely that a fact-finder would not believe that," she wrote. "The flurry of activity began the day after Cole reported the contact with attorneys. The investigation ignored allegations of prisoner misconduct and focused only on the alleged over-familiarity issue."

With the preliminary injunction granted, a full trial on the matter is expected for a later date.

“And hopefully we are given a little bit of time for the taint of these recent events to dissipate a little bit, so people aren’t so frightened," Luby said. "It’s very fair that this man is frightened of losing his job and otherwise.”

There’s no indication of when a trial might occur.

"Although I recognize that the state has a legitimate interest in carrying out executions without federal interference, the balance of the harm is still in Winfield’s favor," the judge wrote. "And the public interest is always in favor of due process."

"Winfield made no showing that the Governor is unaware of Cole’s statements," Attorney General Chris Koster's office wrote.

Koster's office pointed out that the press has reported on the correctional officer's statements about the inmate, and argued that means not speech has been chilled. After the judge's order, the Department of Corrections delivered Cole's statements to Governor Jay Nixon.

"Because the Governor has the information Winfield claims is chilled, the complaint is moot," Koster's office said.

A Missouri House panel has canceled a scheduled hearing about the state's controversial execution procedures.

Committee Chairman Jay Barnes says he called off Tuesday's hearing after learning that Department of Corrections Director George Lombardi was not going to attend it.

Barnes says he didn't want a one-sided hearing and hopes to reschedule at a later date.

It wasn't immediately clear why Lombardi wasn't going to be there.

Inmates' Lawyers Ask Mo. Board Of Pharmacy To Act Before Execution

Lawyers representing death row inmates have filed a complaint with the Missouri Board of Pharmacy, citing St. Louis Public Radio and the Beacon’s investigation from earlier this week.