‘God let me live to see another day’: Ferguson protester hopes for clemency

Joshua Williams always stood out in a crowd. Even during the tense and chaotic 2014 Ferguson protests, Williams could easily be spotted in the signature red hoodie that he rarely went without.

Williams was 18 years old at the time, the same age as Michael Brown when he was shot and killed by police — and old enough to leave home against his mother’s wishes to join the front lines to protest Brown’s death.

The red hoodie was a gift from a teen whose mother was killed by police, and Williams wore it constantly during the months of protests. “He looked up to me because of what I was doing,” he said. “So I wore it to a lot of places."

On Christmas Eve 2014, Williams wore the hoodie to protest another police shooting of an 18-year-old black man, this time at a gas station in Berkeley. In a moment of anger and pure impulse, Williams lit two fires — one in a nearby trash can and another by the door. The signature hoodie made it easy for police to identify Williams.

Three years into an eight-year prison sentence, Williams has big dreams for life on the outside. Now he has a new reason for hope for early release: One of his strongest supporters has risen in prominence since the days of Ferguson protests and is attempting to get clemency for Williams. 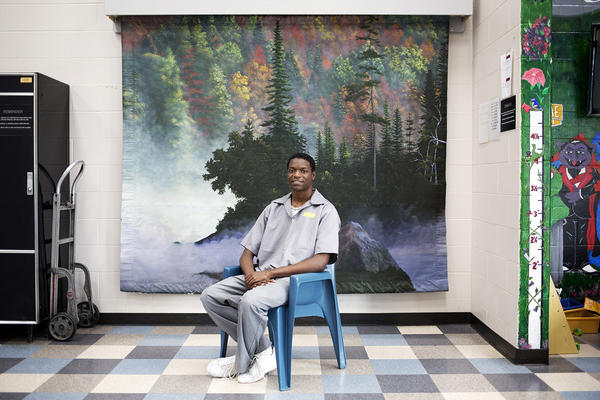 Missouri Rep. Bruce Franks visits Williams at the Jefferson City Correctional Facility when he can and sends his assistant weekly to check.

“He’s going through some things up there,” Franks says. “That’s not the place for Josh, man.”

Franks marched on the front lines of the Ferguson protests so often that Williams came to look up to him as a brother. When they first met, Franks noticed how Williams could quell a tense moment with a quick joke — a useful skill during tense standoffs with police.

Williams quickly discovered a knack for connecting other young people to the movement.

“I remember when he came to the first summit,” Franks said, “and he was like, ‘Look, this is what I want to do. I want to talk with young teens that may be on that verge.’ Because I think he had learned a lot, even in that short process.”

Williams was finding his voice, and it seemed like people were actually listening. His name started circulating on the cable news circuit as the “poster child” for a growing civil rights movement. The Rev. Al Sharpton invited Williams to speak at the “Justice for All” March.

But in the months after Michael Brown’s death after he was shot by a Ferguson police officer, Williams found it increasingly harder to keep up his goofy personality and distinct smile. Two more black men, Kajieme Powell and Vonderrit Myers, were killed by police in St. Louis, and a Ferguson grand jury decided it would not indict then-Ferguson Officer Darren Wilson in the death of Brown.

Williams saw himself in each of these young, dead men. Night after night, he protested police-involved shootings throughout the St. Louis region. He’d show up at meetings and confront people he believed had turned a blind eye to those who could no longer speak for themselves. As his voice got louder, he felt some people still weren’t paying attention.

“I thought, like since they're not listening to our voices, then why not just go and do something that they will listen to,” Williams said. “Because money is they best friend. They will listen when they losing money.” 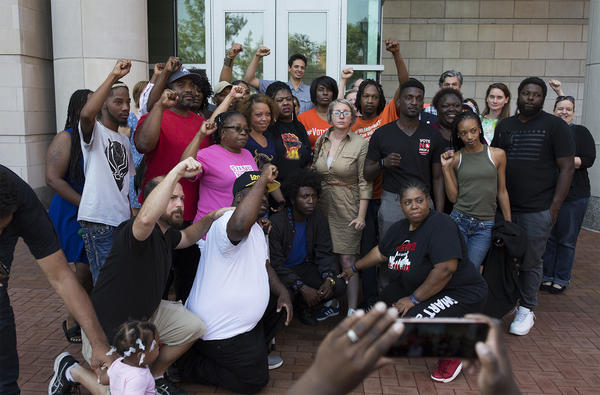 Four months after Michael Brown’s death, a police officer shot and killed 18-year-old Antonio Martin at a Mobil gas station in Berkeley. Protests broke out in the early hours the next night, Christmas Eve. As usual, both Williams and Franks were there.

Franks says the situation was tense. When he and other protesters saw a police officer reach for his gun, they demanded to know why. Soon officers grabbed another protester and Franks attempted to grab him back, starting a sort of tug-of-war.

At the same time, someone detonated a firecracker next to one of the gas pumps nearby. A thick cloud of smoke filled the air, and Williams watched as officers handcuffed Franks.

“By the time the smoke cleared, it's three officers on me,” Franks said. “One officer beating me with a nightstick on my lower half and the other officer kicks me in my head, pepper sprays me in close range.”

In that moment, Williams made a life changing decision. He bolted to the QuikTrip across the street on Hanley Road. He sprayed lighter fluid on a stack of logs near the store entrance, a trash can and, just inside the store, a stack of magazines.

Only the magazines and trash can fires lit and were quickly put out. No one was hurt and the building still stands, but the damage had already been done.

Caught Up and on Camera

Unbeknownst to Williams, his actions were being recorded by a Fox 2 news cameraman. That footage was later handed over to the St. Louis County prosecuting attorney’s office.

Williams was arrested and he admitted to St. Louis County detectives on tape to setting the fires, stealing gum, a lighter and money. He had been arrested for protesting before. In his naivety, he initially thought it would be like all of the other times — that he’d be arrested and then released on bail. But it didn’t work out that way.

The detectives built up a wall of trust with Williams that put him at ease. One repeatedly told Williams that by talking to them he was “getting in front of the story.” He believed it. Even when that same detective told him that they had met before on the frontlines of protests, Williams remained calm.

In video footage of the police interview obtained from the prosecuting attorney’s office, Williams can be seen handing over his DNA samples and clothing to officers, who also took photos of his arms that showed the names and phone numbers of people who frequently protested police-involved shootings.

He even gave them access to his phone, which his lawyer Nick Zotos said didn’t help his case.

"There are text messages on the phone that basically make the video clear as to who the person in the video is," Zotos said.

Williams was charged with two felonies — first-degree arson and second-degree burglary — and a misdemeanor, stealing under $500. 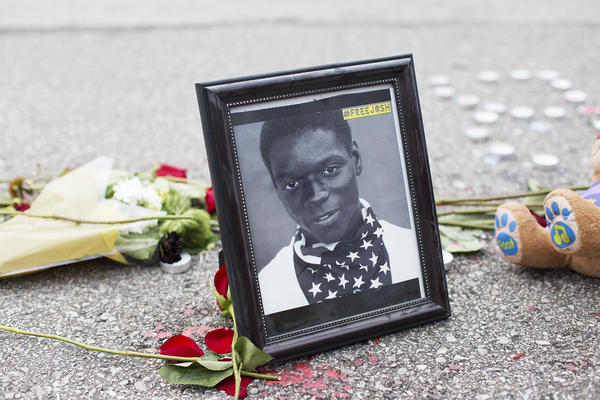 Williams was released on bond on Feb 2, 2015, and began participating in an electronic home detention program. He could only go to work, church and school. But most importantly, he was prohibited from going to protests and rallies. He did it anyway.

"I couldn't help it to go back out there and to be with my people that's protesting and stuff,” Williams said. “So I mean it's embedded in me to go out there to stand up for my rights, regardless of the situation."

Williams was arrested again on July 12, 2015, for participating in yet another protest, resisting arrest and failing to disperse. From there, a ripple effect of consequences soon followed. He was fired from his job at Goodwill. He failed to notify his case manager that he had been fired. He left home at unauthorized times. As a result, his bond was revoked and he ended up back in police custody.

The St. Louis County prosecuting attorney’s office had hard evidence stacked against Williams. And prosecutors were not in the mood to be lenient.

St. Louis Public Radio tried to contact Prosecuting Attorney Bob McCulloch on several occasions, but neither he nor his representatives returned phone calls or emails. According to the court transcripts, Assistant Prosecuting Attorney Jason Denney said a maximum sentence was warranted and “sends a message that we’re not going to tolerate this type of behavior and chaos in our community.”

Zotos knew Williams wouldn’t stand a chance in front of a jury. He advised Williams to enter into a blind plea, meaning the judge would decide his case. Zotos hoped Judge John D. Warner Jr. — who had previously spent two years adjudicating in juvenile courts — would look at the then-19-year-old with no criminal record, and give him a break.

Williams remembers feeling stunned when the judge made his ruling. He received eight years in prison for arson. While it wasn’t the maximum of 15, Williams will not eligible for parole until he’s served a little more than six years. 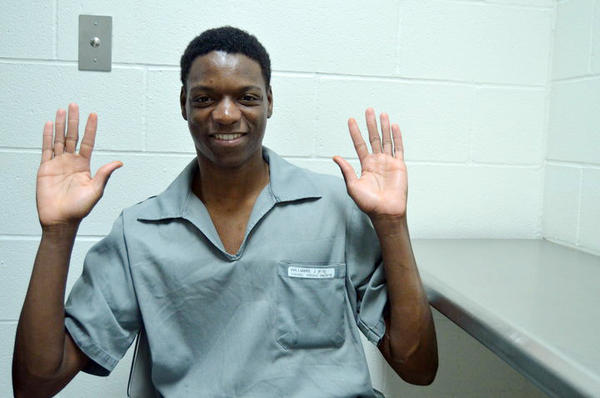 Williams, now 22, has traded in his bright red hoodie for a dull gray jumper. He tries to make the best out of the situation in a place that he says can be “hell” if you let it. He’s started a Bible study group in his wing of the prison, works out daily and has received roughly 4,000 letters from people all over the world, who support him.

“They say, ‘We saw your story on the internet and we are with you. We standing behind you. Anything you need just let us know," Williams said during an interview at the correctional facility.

But outside support can’t always solve problems on the inside. Williams said he’s been written up and sent to solitary on several occasions in what he calls attempts to silence him from speaking his truth to the public.

And he’s had run-ins with prison guards who worked the police lines during the Ferguson protests.

Williams does not regret being an activist, but he does regret how far he went that December night.

“I think clearly now,” Williams said. “I felt sorry for the people and for the owner of the store, too.” 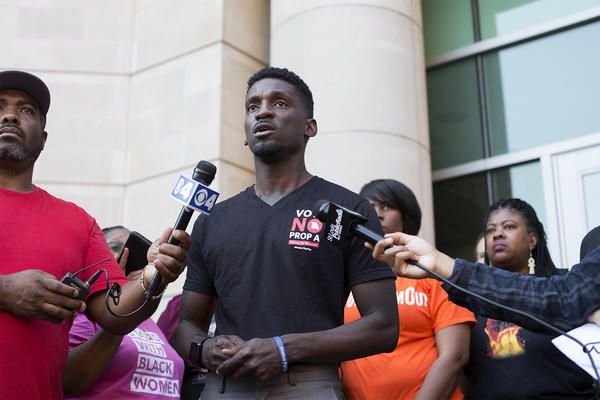 A measure of hope

But now a second chance at life could be on the horizon for Williams. State Rep. Franks is asking Gov. Mike Parson to grant Williams clemency.

Franks first approached former-Gov. Eric Greitens but began the process again when Parson took the office in June. While the new governor is a conservative Republican who served as sheriff in Polk County, Franks believes there is still hope.

"We're going to fundamentally disagree on a lot of things, but those things we do agree on or we can move forward on, then we should,” Franks said. “Do I think it's [worth] a shot? Absolutely.”

A spokesperson for Parson said the governor could not comment on the matter.

Franks doesn’t try to diminish what Williams did and says he had to be held accountable. At the same time, Franks believes the then-19-year-old got caught up in a moment and didn’t know how to express his frustrations. And Franks said eight years fell into the realm of unfair sentencing practices.

News of potential clemency has given Williams hope and a sense of freedom.

"Somebody's trying to help me get out of here. And I know I won't be here long."

Regardless of what the future may hold for Williams, when he does get out, he wants to focus his activism on youth. He says his heart has always been with young people, and he sees himself finding ways to help get kids off the street with youth centers … and out of the prison system.

His passion and idealism keep him going.