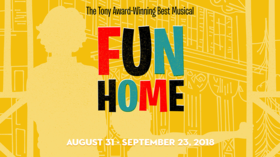 Springfield Contemporary Theatre's 2018-19 season continues at SCT Center Stage in Wilhoit Plaza, 302 E. Pershing (corner of Pershing and Robberson) with "Fun Home," the Tony-winning musical based on the graphic novel of the same name by Alison Bechdel, for a four-weekend production run starting tonight (August 31) and continuing through September 23rd.  With book and lyrics by Lisa Kron and music by Jeanine Tesori, the show explores seeing your parents through grown-up eyes.  When her father dies unexpectedly in an accident (or possibly a suicide), graphic novelist Alison Bechdel dives deep into her past to tell the story of the volatile, brilliant, one-of-a-kind man whose temperament and secrets defined her family and her life.  I talked with Rick Dines and Kim Crosby, who play Alison’s parents, Bruce and Helen Bechdel, described by Crosby as “the lovely dysfunctional pair.” Gretchen Teague directs the production, a Springfield-area premiere, with musical direction by Alex Huff.

Rick Dines says Bechdel approaches the subject matter “as an adult looking back on that time, unpacking that whole period of her life. What I love about it is that it’s about adults coming to terms with your parents as fallible people, and not just those people you remember as a kid.”

Moving between past and present, Alison relives her unique childhood playing among the caskets at the family-owned funeral home in the small Pennsylvania town of Beech Creek (“Fun Home” being short for “funeral home,” of course). Bruce Bechdel was something like the fourth or fifth generation operator of the business, but being in a small town there simply wasn’t enough funeral business to make ends meet, so he and wife Helen were both high school English teachers.  He also spent much time utterly obsessed with restoring and renovating the home they lived in.

There are three children: John, Christian and Alison.  Kim Crosby says it’s an interesting play for the actor portraying the mother, “because Bruce is more present throughout the narrative than Helen is.  I come in and out of the play depicting certain moments in her life. So it’s interesting as an actor to just come in and out through (Alison’s) childhood and young adulthood.

“They’re a loving family.  I think the trials that Helen and Bruce have, especially regarding his sexuality, are challenging for her. And Helen’s just trying to hold it together, I think—for the sake of the children too. But there’s love there, too, even though there’s dysfunction.”

One of the major aspects of Alison Bechdel’s story is not only her discovery of her own lesbian sexuality, but also, significantly, that of her father, a closeted gay man.  Says Rick Dines, the father is “very obsessed with the way the family is perceived, and the ‘front’ that they’re putting out there—which is represented in his obsession with restoring this house. So when (Alison) goes into college and comes out of the closet, he (Bruce) is such a closeted man that there is a certain pressure that it creates upon him at that point in his life.” Adds Kim Crosby, “I think anyone in life—you know, if there’s something that you’re trying to suppress, it’s like a pressure cooker... and that stress has to come out somehow.”

There are nine actors in the cast, three of whom portray Alison at various stages of her life. Denna Langston is Alison ages 10-12; Ruby Infante is Alison the college student; and Ellen Spann plays Alison the adult graphic novelist looking back at her life. “All three of these actresses are phenomenal,” says Kim Crosby.

The entire concept is fascinating: a graphic novel that’s actually the author’s memoir, which is then made into not just a stage play, but a musical. Rick Dines says, “What the writers have done is, they’ve captured the essence of that graphic novel so well, because of what Bechdel does in the writing of the piece—she so fluidly jumps back and forth between her childhood in the 1970s, college in the ‘80s, and her current life.  It’s not a linear narrative at all, but she so fluidly jumps through it topically, and seeing how certain elements influenced other elements.  They’ve captured that so well in the musical.  And structurally, it’s not an easy structure to do well--and they’ve done it so well!  And I think a lot of it comes from the roadmap Alison Bechdel laid out in the graphic novel.”

The grown-up Alison is onstage throughout the 90-plus minutes of the show as a narrator and observer of every scene—“she’s literally drawing them out on her pad,” says Kim Crosby. “It’s a wonderful device, It makes for a very compelling piece, wonderfully heartwarming.  It’s a great night of theatre.” She and Rick Dines agree that the musical score is “wonderful... the orchestrations are just mouth-wateringly beautiful.”  And Dines points out an interesting fact about “Fun House”: “When it won the Tony for Best Musical (in 2015), and I think it’s horrible that it took that long, but it’s the first musical written by an entirely female team to win Best Musical.”

"Fun Home" contains adult language and content.  After the Friday through Sunday opening weekend, the production will run 7:30pm Thursdays through Saturdays and 2:00pm Sundays through September 23.  The three Thursday performances are "Pay What You Can," with tickets available starting at 6:30pm day of show. Opening weekend tickets are $25; otherwise tickets are $30 adults, $27 students and senior citizens; with a $12 student rush.  For information visit www.springfieldcontemporarytheatre.org or call 831-8001.