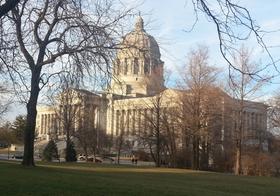 A bill that critics say would allow most government records in Missouri to remain closed to the public passed the House Thursday and now heads to the Missouri Senate. It reverses some of the transparency laws ushered in by voters in November.  It’s raising red flags among transparency groups, the press, and some citizen groups.

A refresher in civics:  why public records are important

First, a little refresher on open records laws:  in open societies like ours here in the US, members of the public can contact government agencies and ask for documents that fall under the definition of “public records.”  These records allow people who don’t work in a government office to see what the government is up to.    It’s a critical part of self-rule, and you won’t find many public records in more authoritarian places like the Persian Gulf or Russia.

Public records allow the power to remain in the hands of the people.

On the federal level, the main law that deals with open records is the Freedom of Information Act, or FOIA.

But at the state level here in Missouri, it’s found in Missouri’s Revised Statutes Chapter 610—more commonly known as the Sunshine Law.

And the bill that would alter the Sunshine Law—the one that just passed through the House—is House Bill 445.

How Schroer's amendment to H.B. 445 would limit the Sunshine Law

The underlying bill is actually about cleaning up local governments:  it would hold local elected officials to many of the same standards that state lawmakers now have to follow, like limiting gifts from lobbyists and capping campaign contributions.

But the part that’s raising eyebrows is an amendment that was tacked on to the bill.  That amendment, offered by Rep. Nick Schroer, would dramatically cut away at the Sunshine Law.

As written, the amendment would keep records from reaching the public if they are:

* “received or prepared by or on behalf of a member of a public governmental body.”

* consist of “advice, opinions and recommendations in connection with the deliberative decision-making process of said body.”

Rep. Schroer said last week he offered the amendment because he was concerned about the private, sensitive, and confidential information of his constituents who communicate with him.

"I find it quite curious when the individuals, my colleagues down here, state that it's too broad, but they have no options that they want to bring to the table--no alternative language that they could use to protect our constituents. So, to me, they're guestimating that they believe it's too broad," Schroer said.

Schroer says he's run the language of his amendment by non-partisan attorneys who do research for the House of Representatives, and they recommended the amendment's wording.

Schroer says he’s concerned that Social Security numbers and other sensitive information could be exposed under the law as written.

Missouri Press Association:  this would 'close a tremendous amount'

Jean Manecke, outside counsel for said it’s not just lawmakers and their emails and letters that would be hidden from the public if this bill became law.

“The language that has been added to H.B. 445 would close a tremendous amount of records of all public bodies,” Manecke said.

She says it closes records that have been open across the state for years.

House Speaker Elijah Haahr, a Republican from Springfield, voted for H.B. 445 Thursday. The next day he was in Springfield for a roundtable discussion with Governor Mike Parson.

“Do you feel all correspondence between you and your colleagues in the House and Senate should be kept private, like this bill suggests?”

Haahr did not answer that question, which was about the amendment. Instead, he touted the merits of the underlying ethics bill. Here’s his complete answer:

"Well, it's interesting because, what we're trying to do with what Clean Missouri passed last year, in terms of a lot of the same reforms that Speaker Richardson has been working on--caps on donations, lobbyist gifts--we're now trying to apply  those to local government officials. They subsist under a system that we used to be under. What we're trying to do is to apply that to them.  So, I think it's very interesting that, now as we move to apply those things to local government officials, suddenly we're seeing some more discussion on that issue. So that bill passed yesterday. It's going to move into the Senate. Obviously, we've been in conversations with them about tweaks that we can do to the bill.   I was very proud of the bill that we passed yesterday. We'll see what the Senate comes to us back with," Haahr said.

Another reporter asked Governor Parson whether he would sign the bill “as is.”  Parson said he  will wait and see what it looks like when it reaches his desk.

The bill now travels to the other end of the Capitol building as it begins the process all over again, this time in the Missouri Senate.  It could receive a committee assignment as early as Monday; it will then be scheduled for a hearing.

“Those hearings are open to the public. And I have heard. Citizens have a right to be there—to complain about what their legislators are doing,” said Jean Manecke with the Missouri Press Association.

Before November, lawmakers were not subject to many parts of the Sunshine Law.  But voters said they wanted to change that and passed Amendment 1, also known as Clean Missouri, making correspondence between lawmakers and their constituents public record.

You can find out how your State Representative voted on this bill by clicking here for the House Journal's page that details the vote after H.B. 445's third and final reading.

If you don't know who your State Representative is, you can look it up using your address at www.House.mo.gov.