Once again, Republicans are raising questions about U.S. Sen. Claire McCaskill’s personal finances – or rather, those of her husband, wealthy businessman Joe Shepard.

But this time, she’s accusing her GOP critics of being hypocrites because they’re not making the same demands of President Donald Trump.

On Wednesday, McCaskill and Hawley released copies of their 2017 tax returns.

Hawley and his wife, fellow lawyer Erin Hawley, reported joint gross income just under $300,000. McCaskill collected almost as much – $266,000 – from her Senate job and a state pension. The senator released her return's two major pages, while Hawley released close to 60 pages. 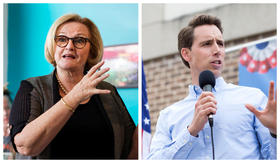 McCaskill and her husband file separate tax returns. The couple married in 2002. Shepard – who has been wealthy for decades – has kept his tax returns private, although he has periodically allowed the press some access to his finances.

The senator’s latest financial disclosure report, filed annually with the Senate, shows that Shepard currently has investments in close to 300 limited partnerships. Many of those partnerships are involved in low-income housing, where federal subsidies are obtained to help cover the tenants’ rents.

Various press accounts have reported that the subsidies have totaled more than $130 million since McCaskill became senator in 2007. Independent watchdog groups have backed up her claim that most of that money goes to the developments, and not into Shepard’s pocket.

Hawley says that GOP questions about the subsidies, and other aspects of the senator’s family wealth, could be answered if Shepard’s tax returns were made public.

“She appears to have gotten quite wealthy from her U.S. Senate seat and seemed to profit a great deal in the last 12 years she’s been in the Senate,” Hawley said.

But in a telephone news conference, Hawley declined to call for Trump – also a wealthy businessman – to release his tax returns.  Trump is Hawley’s most prominent political backer.

“The last I looked, the president wasn’t running in this Senate race, but Senator McCaskill is,” Hawley said.

McCaskill disagrees. In a statement, campaign press secretary Eric Mee said, “Only the most hypocritical politician would refuse to criticize the President for not releasing his tax returns and then complain about Claire’s husband. Claire has filed separately from her husband since they met and will not be releasing his return. Her family’s finances are fully and properly disclosed on her 61-page personal financial disclosure.”

McCaskill’s family income often has been a Republican target.

In 2012, after she released her tax return, Republican rival Todd Akin said he wouldn’t make public his tax returns until Shepard did so.

Income taxes have been a frequent issue in Missouri’s political contests – but it’s unclear if such debates have influenced voters.

In 1992, all five of the state’s major candidates for governor – three Republicans and two Democrats – released their tax returns spanning several years. The returns caused little controversy in what was among Missouri’s most-combative contests in modern history.

In 2016, Democratic gubernatorial nominee Chris Koster – then the state attorney general – released five years of his taxes. He called for GOP rival Eric Greitens to do the same.

Greitens refused to make his taxes public, prompting Koster to decline to debate until the Republican changed his mind. Greitens kept his finances private and still won the contest for governor by five points – propelled in part by Trump’s 18-point victory in Missouri.