How you too can live like 'Stan The Man' Musial

Cardinals fans know that there was only one "Stan The Man" Musial. But, an opportunity to get close to living like the legendary baseball player has come on the market.

The Ladue home of Stan Musial is up for sale, Realtor.com says. Musial died in January and his wife, Lil, died in May 2012. 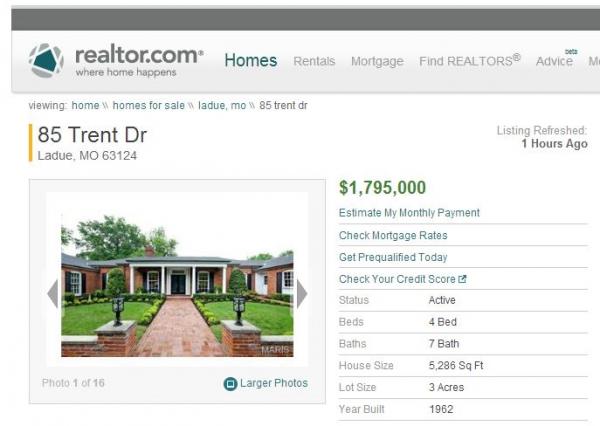 For the list price of just under $1.8 million, you can become the new owner of the Musial's home, built in 1962. (More than one account say that was a banner year for Stan The Man).

What's it like inside? Realtor.com describes it as a "traditional mid-century with European flair" and says that it "appears that not much has changed since that time."

Photos show a black and white checkerboard-patterned marble entryway, a pool and views of the property's three acre grounds.

If you're interested in visiting more "Stan-themed" sites, check out the Riverfront Times' "Stan Musial Tour of St. Louis."

Would you want to live in the former house of a legend?

(h/t to @ericasmith for the tweet that got our attention)

On Sunday morning fans gathered at Busch Stadium to remember St. Louis Cardinals legend and Hall of Famer Stan Musial, who died at the age of 92 last night.

Below is audio of what some of them had to say.