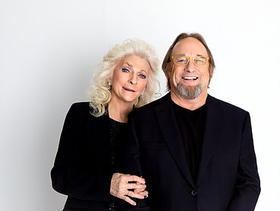 Judy Collins and Stephen Stills had a famous—and, as both readily acknowledge, tumultuous—romance in the late 1960s.  It didn’t last, though it did inspire one of the best known songs of the era, “Suite: Judy Blue Eyes,” written by Stills and performed by him, along with his then-bandmates David Crosby and Graham Nash. But the friendship between Collins and Stills has endured for more than fifty years.  Now, a half century later, Judy Collins and Stephen Stills have finally recorded a CD together called “Everybody Knows.” And they’re in the middle of a national tour that will bring them to Springfield’s Gillioz Theatre, 325 Park Central East, for a concert Thursday September 20 at 7:00pm.

A few weeks ago I talked with Judy Collins by phone from her home base in New York, and the first thing I felt compelled to tell her was that, having listened to the album, “you two both sound terrific!”  She sounded quite pleased to hear it.  Collins and Stills are both in their 70s now.  I’ll be 62 in November, and I can only hope that in ten or fifteen years my speaking voice (let alone singing!) will be in anything like as good condition.  “Well,” said Collins, “we’ve had a lot of practice, and we love what we do.”

How did she and Stills manage to remain close even after breaking up romantically? Mostly by keeping the lines of communication continually open, said Judy Collins. Despite the stormy nature of the love affair itself, “we didn’t say terrible things to one another, and I think that’s part of the key. I think we parted with a great deal of angst and ‘Sturm und Drang’ emotionally, but we didn’t insult each other.  We didn’t say unthinkable things—I think that was part of it. And I also think we always had the music ‘thing’ between us. And that kept us friends, I’m sure. We always talked, we always kept track of each other. I would go down to see him in Florida sometimes, and I would see him in New York occasionally. So we kept the lines open.”

This album and tour are their first real experience performing together in public.  “I didn’t do anything with (Stills) collaboratively or writing-wise. The only thing I did with him previous to going on the road with him last year was that I went on Graham Nash’s television show 20 years ago (the A&E cable network talk show “The Inside Track”), and Stephen came and played guitar on ‘Someday Soon’ for me—but he didn’t sing. Then he came to my apartment maybe five years ago, and we recorded an old Tom Paxton song which I put on an album of mine called ‘Paradise.’ And ‘Paradise’ also has a duet with Joan Baez.  I’ve recorded with her before—we made a record together in the ‘60s. But that’s all.  So this is a whole new fresh venture for us.”

Judy Collins and Stephen Stills had been kicking around the idea of a CD and tour for several years, but in their long history together it’s still a recent phenomenon.  Stills has said he couldn’t imagine them doing it 20 or 30 years ago, and Collins agrees. “It took each of us to live out a good large percentage of our careers, probably prove to ourselves what we were able to do, what we could do, before we could go out as equals,” she told me. Not that anyone else would have considered them anything less than equals, but in their own eyes. “Well, I think a lot of emotional things, a lot of drama, a lot of growing up, has happened,” Collins said with a chuckle, “during the last 50 years!”

The Collins/Stills CD, “Everybody Knows,” was partly crowd funded, but “we also had a lot of help from my record company.” It was released on Judy Collins’s own label, Wildflower Records (distributed by Cleopatra). “So Cleopatra was very helpful, and then we got a lot of help from various sources, which is good.”

The CD’s title track was written in 1988 by the late Leonard Cohen, whose career Judy Collins helped launch. The lyrics seem particularly timely today, and Collins knew she wanted to have the song on the new CD. “After I had decided that not only was (Leonard Cohen) the most brilliant, the most generous, the most amazing person I ever knew, but also that he was the smartest person I ever knew... he died the morning of the election (November 7, 2016)! He got outta town.  So shortly after his death I started singing ‘Everybody Knows’ in concert.  And I recorded it, and I called Stephen (Stills) and I said, ‘We’ve got to do this song—it’s a must!’ And he agreed.”

Among other things, on their album Stills and Collins revisit songs from their own catalogs, both solo and in duet.  Judy Collins promised their Gillioz concert would contain “a cross section of the songs from the album. But we’ve added at least a half dozen other songs.  They range from—big surprise, we’re doing ‘The Highwayman’. And we’re doing ‘You Don’t Have to Cry’ and ‘Long May You Run.’  There are a lot of wonderful new treats.”  The arrangements on the CD are basically true to both his and her “folky” roots.  But she said they do take the opportunity to “rock out” a bit onstage. “Oh yeah—and we finally got them right!  We’ve played them enough now that we really know them.”

Both Judy Collins and Stephen Stills have continued to tour, record and perform separately, but their current joint concert tour has added many more dates and venues to their already-crowded calendars. I asked her how she keeps going after—dare I say it?—a career spanning six decades. “Well, we make a living, so that’s part of it.  We love it.”  Still, being in her late 70s, touring and performing present definite challenges: specifically, she said with a laugh, “the traveling and the arthritis! And we got ‘em all beat.  We have done 25 shows already this year, and we’ll do 25 more. So we’ll do 50 again this year; we did 50 (concerts) last year. And then it looks like things are sparkin’ up for 2019!”  She got a big laugh out of my contention that it’s created a whole new “cottage industry” for her and Stills. “Yeah, I was waiting to get a ‘cottage’ like that!”

As the classical music guy at KSMU, I had to ask Judy Collins about her friend and mentor, the conductor and pianist Antonia Brico, with whom Collins studied piano when she was living in Denver.  In 1974 she produced a well-regarded documentary film about Brico, “Antonia: A Portrait of a Woman,” that helped revive Brico’s career at a time when it was still exceedingly difficult for a woman to be taken seriously in the symphonic conducting world. Around the time the documentary was making the rounds, CBS-TV’s “60 Minutes” aired their own profile of Antonia Brico that brought her further publicity—not to mention a Columbia Records contract. Brico felt Judy Collins had the makings of a fine concert pianist, and never managed to completely reconcile herself with Judy’s folk/pop career. “No,” she said with a chuckle, “’Oh, you could’ve gone places!’ She still was burning a candle over that!” (Brico died in 1989.)

Not only did Judy Collins study piano with a world-class musician, she’s classically trained as a vocalist as well. “Oh, absolutely. I studied with a great teacher for 32 years in New York” starting in 1965. “While everybody else was hanging out at Max’s Kansas City (the famous New York City pop/punk music/poetry nightclub and restaurant), I was standing in my teacher’s living room doing scales and exercises!” And she’s glad she did.

Judy Collins’s classically-oriented musical training seems not to be a particularly well-known facet of her career. She mentioned going to see the current Broadway revival of Rodgers and Hammerstein’s “Carousel” (which closes September 16) the night before she and I talked.  After the show she went out to dinner with one of the show’s stars, opera veteran Renee Fleming.  Fleming apparently was unaware of Judy’s classical background—“or about Antonia Brico.”

In the years since she produced the Brico documentary in 1974, Judy Collins has thought of writing a biography of her former teacher, and/or creating a full-fledged feature film. “I have all of her papers, I have all of her notes. I have her memoir. I have everything.” Collins said she’s even talked on a couple of occasions to actress Glenn Close about possibly playing Antonia Brico in a dramatic film about her life. “But I just could never really get into it, get it finished. Maybe I will... later.” Of course, Judy Collins has authored several books, but she acknowledged that a biography of Brico would be a “huge” undertaking. “I took a sort of little foray into that kind of writing on my last book.” Published in 2017, it’s called “Cravings:  How I Conquered Food,” and she said “it’s about my own struggle with food”—

specifically, food addiction.  In between chapters about Collins’s food struggles, she wrote “small biographies of about 12 diet gurus through history,” ranging from Lord Byron to Robert Atkins.  “And that was really fun, doing the history, and doing the research for that was really great. I loved it.”

Apparently a European company has beaten Judy Collins to the punch in producing a theatrical film of Antonia Brico’s life story.  “I’m sorry it wasn’t me, because I wanted to, (but) somebody has made a theatrical movie about Antonia’s life. It’s coming out of Germany [actually produced by the Dutch film company Splendid; it’s called “De Dirigent (The Conductor),” directed by Maria Peters; it was shot in Europe in the fall of 2017] and it looks pretty good. The trailer’s very good.”

Money does perhaps play its part in Collins settling down and writing an extensive biography of Antonia Brico—she noted with a laugh that “I’d need to have a Fulbright scholarship to do that!” The other (possibly bigger) problem is finding the time in her still-busy schedule, which brings her and lifelong friend Stephen Stills to our own Gillioz Theatre this month.