Missouri’s two major candidates for governor disagree on many things. But Democrat Chris Koster and Republican Eric Greitens do share similar views on the dueling tobacco-tax hike proposals on the Nov. 8 ballot. They oppose both of them.

That opposition could be significant, since whoever is elected governor will likely have significant roles in implementation of any of the six ballot measures that go before voters. Here’s a rundown on where Greitens and Koster stand on those issues, including some of their observations.

Both support reauthorizing Missouri’s one-tenth of 1 percent sales tax that is used to pay for soil and water conservation, as well as state parks and historic sites.

Koster supports the proposal, which would reinstate some form of campaign-donation limits – generally $2,600 per election – for statewide and legislative candidates, as well as judges. 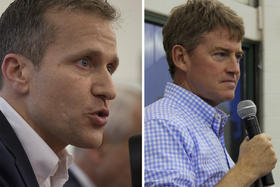 Koster used to oppose campaign-donation limits, but has changed his mind because of the rise in huge contributions in recent years, that have been $100,000 or more. Some donors have given more than $1 million.

Koster and Greitens have been among the beneficiaries.

Koster called Amendment 2 “an important first step,’’ but added that – if elected governor – he’ll push for changes so that the limits cover all candidates. “I think we’re going to have to build on it, because it’s not a perfectly written vehicle,’’ Koster said.

Both candidates oppose both proposals.

Amendment 3 would increase Missouri's tobacco tax by 60-cents a pack, plus another 67 cents-a-pack on small tobacco companies. Money would be aimed at early childhood education and health-care services.

Proposition A would increase Missouri’s tobacco tax by 23 cents a pack, with the money used to pay for road and bridge improvements.

A spokesman said Greitens “is opposed to raising taxes on hardworking Missourians.”

Koster, who floated his own tobacco-tax proposal in 2015, has more nuanced reasons for his objections.

Koster emphasized that he supports early-children education, but objects to some of the wording in Amendment 3. “It creates a funding mechanism that is very awkward and not in the best interest of the state,’’ he said.

He also calls for a broader approach for tackling the state’s public-education needs. “You don’t build a new addition to your house when your foundation is cracked and you have a hole in your roof," Koster said.

Koster also has been calling for more state investment in transportation. But he says he has other objections to Proposition A, which is backed by a coalition of convenience stores and small tobacco companies. Koster notes that the coalition opposes Amendment 3 and has killed previous proposed tobacco-tax hikes.

He calls Proposition A “a bit of mischief’’ intended to confuse voters and hurt Amendment 3.

Greitens did not take a stand on the proposal, advanced by the state’s real-estate industry, which is concerned about legislative proposals to expand Missouri’s existing sales taxes to include services. A tax on services would affect real-estate commissions and many other financial transactions, as well personal services like manicures or haircuts.

Koster said he isn’t thrilled with the wording of the proposed ban, but he adds that he likely will vote for it.

“I don’t like putting artificial limits on government’s ability to do what is in the best interest of this state,” Koster said. “This is yet another handcuff … It limits the options to solve big problems.”

Greitens supports the proposal, which would allow the state to impose a requirement that all Missouri voters show a government-issued photo ID, such as a driver's license or passport, before casting their votes.

“Securing our elections against voter fraud should be a priority for all of us, and common-sense voter ID provisions are long overdue in Missouri,” a Greitens spokesman said.

But Koster opposes the mandate. He emphasized that he’s not accusing the GOP supporters of seeking to “disenfranchise” voters, notably the poor and minorities who are less likely to have such IDs.

But Koster added, “The proponents of this proposal have opened the door to disenfranchisement.”

If voters approve the mandate this fall, Koster said that – if elected governor – he will work to make sure that the companion measure that implements the requirement is applied fairly. The General Assembly passed the implementation bill earlier this year, and in September overrode Gov. Jay Nixon's veto.