Maplewood residents gather for ‘next step’ in nuisance ordinance controversy

The event was organized by the Metropolitan St. Louis Equal Housing and Opportunity Council (EHOC) and the ACLU of Missouri to inform Maplewood residents of their legal rights and encourage residents to urge state and local lawmakers to change nuisance laws.

“Our goals are to educate folks about the ordinance, including how we’ve seen the ordinance play out to harm members of the community,” said Sandra Park, an ACLU senior staff attorney. 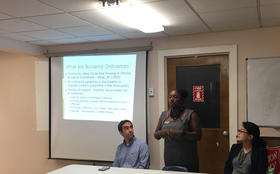 The current Maplewood nuisance ordinance, updated in 2006, can require a hearing for the resident if the resident's address has three or more calls to law enforcement. The hearing could result in the expulsion of the individual from Maplewood.

MORE: Nuisance or Nonsense? From the We Live Here podcast

Maplewood’s ordinance is the subject of an ACLU of Missouri lawsuit in which the organization is alleging the ordinance is unconstitutional. The lawsuit centers around former Maplewood resident, Rosetta Watson, who was removed from her home following three calls made to the Maplewood Police Department. Watson called police because she was in fear of an abusive former partner.

“We have seen in the records of Maplewood that there has been multiple cases of enforcement of the ordinance against people who are seeking help for domestic violence,” Park said. “That resulted in the revocation of their occupancy permit so that they can no longer live in Maplewood.”

The ACLU of Missouri’s lawsuit against Maplewood is pending in federal court. The organization felt the time was right to hold a community discussion.

“It made sense to do it now as the lawsuit is pending, because we have seen that there have been highly problematic ways of the city enforcing the ordinance,” Park said.

The ACLU lawsuit was preceded by another lawsuit filed by EHOC against the city in March 2017. The lawsuit alleged Maplewood was participating in housing discrimination but was dismissed by the federal courts.

“It was dismissed on the grounds essentially that we didn’t have enough statistical evidence to produce a claim of disparate impact under the fair housing act,” said Kalilah Jackson, EHOC senior staff attorney. “EHOC was pursuing organizational complaints on behalf of the greater community.”

A study by EHOC concluded that at least 69 jurisdictions in metro St. Louis have some sort of crime-free nuisance ordinance, Jackson said.

"These are real people, these are real lives, and people are making decisions not to call 9-1-1 for services because they're afraid of losing their homes, and that's just unacceptable," Jakcson said.

"The ACLU is presently suing the City of Maplewood in regards to our nuisance ordinance. The city will not participate in this public forum due to the ongoing ACLU litigation. We strongly disagree with the ACLU and EHOC position."