Medicaid Turns 50: What’s Next For The Nation’s Health Safety Net?

Congress established Medicaid fifty years ago today as a health insurance program for the poor, with the intention that the program would provide care just as good as what the rest of Americans receive. According to Rutgers University Medicaid scholar Frank J. Thompson, the program has done a lot of good, even if it hasn’t quite lived up to that early goal.

Looking to the future, Thompson expects that the great majority of states will accept the federal government’s offer to pay most of the cost of expanding the program to people with incomes up to 138 percent of the federal poverty level. However, he says states will also have more discretion over how much they’ll pay healthcare providers, which may affect care.

Side Effects reporter Andrea Muraskin spoke with Thompson about what changes are on the horizon for Medicaid.

Side Effects:  Has Medicaid lived up to Congress' intent to provide care for the poor as good as any healthcare? What are its weaknesses?

Thompson:  I think the program has done a lot of good. But I don't think the care you typically get from Medicaid is as good as you probably get from many employer-sponsored plans, or from Medicare. And the primary reason is, I believe, that Medicaid, in general—and states vary some—pays physicians and hospitals and nursing homes less than these institutions can receive from other sources.

So I think it's fair to say in most parts of the country, if you're a child (nearly half the enrollees in Medicaid are children) or if you're a pregnant mom and you want care through your pregnancy and in the immediate period afterwards, that the care Medicaid offers is pretty good.

But, here's the kicker. If you have a disease and you need specialists to treat you, getting a specialist to see you promptly is often a big challenge for Medicaid enrollees. Medicaid patients will be seen, and they will be helped, but their access tends to be less than the access you would have with your employer-sponsored insurance, or that Medicare people have. And the key to that is really payment.

Medicaid payment rates are not adequate. It's the Achilles heel of the program. But they've been sufficient so that a lot of people get served reasonably well.  A frequent accusation that Medicaid opponents express is that the care isn't any good. And that's simply not true. There are studies that show you're better off if you're on Medicaid than not having any insurance.

Side Effects: There is a lot of variation in Medicaid programs between states. For example, when Indiana negotiated an expansion at the end of 2014, the state received a waiver that allowed it to require enrollees to pay for part of their own care. Do you think Medicaid will continue to look different from state to state?

Thompson: I think we'll see even more movement toward variation. The federal government has been generous in negotiating waivers for the states. Beginning in 2017 there is new comprehensive waiver authority, which will give even more ability of the federal government to negotiate different flavors of the Affordable Care Act, which would include different flavors of the Medicaid program's role. 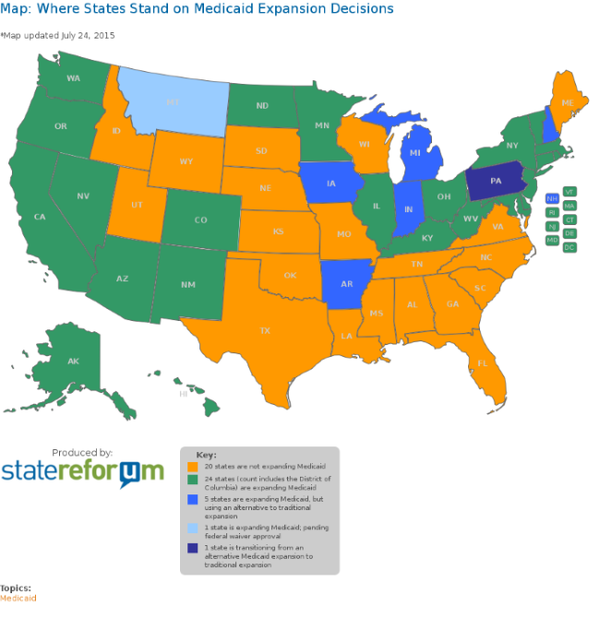 Side Effects:  With more people being eligible for Medicaid, will the quality of care go down? Will it create problems with access?

Thompson:  That's a very legitimate question. But it's a manageable problem. I don't think that there will be a deterioration in care.

They were worried about this in Massachusetts in 2006 when Governor Romney came up with a plan much like the Affordable Care Act. I think on balance access has improved and there's no signs that quality has deteriorated.

There two things that are worth emphasizing here: One is the Affordable Care Act poured a lot of money into federally qualified health centers, which have been around since the 1960s to provide care to Medicaid enrollees and to people who are uninsured. The number of health centers is growing.

The second thing that is going on, at least in some states, is I think there will be some movement to empower physicians’ assistants and advanced practice nurses to meet some of this demand. And I think for basic primary care, they will do a good job in meeting it.

Side Effects: In the recent Supreme Court case Armstrong v. Exceptional Child, the justices ruled that doctors who have grievances with the rates their states pay them for Medicaid patients will no longer be able to take those complaints to the courts.  What does this mean for Medicaid enrollees?

Thompson:  It means that state legislators and state bureaucrats will have much more discretion to determine whatever they want to pay Medicaid providers. Having said that, there are major interest groups in states that are going to push hard to make sure the payment rates are at least adequate. Hospital associations, managed care organizations, and nursing homes will lobby legislatures not to let Medicaid payment rates fall too much.

Side Effects: Medicaid has come to play a major role in paying for nursing home care and long-term care for the elderly and people with severe disabilities. But  we’re seeing a trend towards providing that care at home rather than in nursing and assisted-living facilities. Will that mean a cost savings for states?

Thompson: Home and community-based care is cheaper per enrollee that nursing home care, or most assisted living. But state budget officials worry that there is huge pent-up demand for professional home care among families and friends that currently help their loved ones in the home for free. Because more people will apply for home care than will seek nursing home care, it will in the aggregate wind up being more expensive. So state officials want to ration these services, and I expect in some states the waiting lists will be long.

Frank J. Thompson is a professor of political science at the School of Public Affairs and Administration at Rutgers University in Newark, New Jersey. He is a contributor to the book Medicare and Medicaid at 50: America's Entitlement Programs in the Age of Affordable Care.

A one-year reauthorization for a tax that provides a large chunk of funding for Missouri's Medicaid program moved toward Governor Jay Nixon's desk on the final day of session.

A new audit claims Missouri owes the federal government $34 million for not complying with Medicaid regulations.

The St. Louis Post-Dispatch reports that meant drug companies kept more money while there was less for Medicaid recipients.

The Missouri Department of Social Services oversees the program and says it disagrees with the audit.

A department spokeswoman says the amount owed is closer to $7 million.