Federal employees throughout metro St. Louis are feeling the brunt of the partial government shutdown two weeks in, as agencies and departments have placed workers on furlough or have required them to work without pay.

Federal employees are grappling with how to make ends meet, as President Trump and members of Congress seem unwilling to break the stalemate over the president’s demands for funding to build a border wall.

“If I apply for loans, then I’m going to have to pay those loans back,” said Sheila Harrison, a processor in the customer service department at local USDA Rural Development Office.

Harrison serves as the legislative co-chair of the American Federation of Government Employees Local 3354, the union representing St. Louis-area federal workers. She’s one of thousands of workers furloughed since the start of the government shutdown.

“If the government doesn’t open up no time soon, then we will not receive a paycheck by next Friday, and some of my bills are due then,” Harrison said.

Some of the bills Harrison needs to pay include rent, utilities and medical bills.

“I’m a breast-cancer survivor. I have diabetes. I’ve tried to make sure that I’ve stocked up on my medicines, but they’re going low now, and I’m running out of money,” she said.

The shutdown has affected several different functions of the USDA, including the ability to process home loans, Harrison said. That particularly impacts low-income applicants.

“We’re pretty much like the lender of the last resort,” she said. “They can’t move in, because some of their loans are not being processed.” 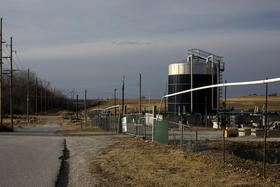 And the shutdown isn’t just affecting government workers. Small-business owners who supply goods and services to the federal government are among those feeling the shutdown’s impact.

“When I’m not getting paid for work that either I have done or work that I am going to be contracted to do, it means that sometimes I can’t pay invoices, or invoices get paid a little bit later,” said Bethany Steevens, the business development manager of Blue Sun Scientific.

Steevens started her business last year. It provides environmental chemistry equipment to clients across the U.S., including federal agencies such as the EPA and the United States Geological Survey (USGS). Steevens said the products she sells cover a variety of needs, including testing water and air quality.

“The USGS and the EPA — a lot of these scientific government agencies — they all do really essential work,” Steevens said. “What that means for the EPA, it means that some of their cleanup initiatives and projects that have been greenlit, those get slowed down, because there’s uncertainty over money and hiring and financials.”

The EPA press office said some services, including the Superfund program, will respond to sites where there is “an imminent threat.” The West Lake Landfill in Bridgeton is a Superfund site.