For Michael Brown, Wheels Of Justice May Turn Slowly | KBIA

For Michael Brown, Wheels Of Justice May Turn Slowly

St. Louis Board of Alderman President Lewis Reed has an idea about what’s driving the frustration about Michael Brown’s death. 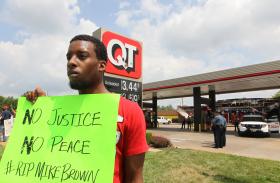 “We need to get some information out, some good solid information out,” said Reed on St. Louis on the Air on Monday. “The people need to know what direction we’re taking. Not we, but the department is taking.”

But Reed’s hope to “expedite” the investigation may not come to pass. Law enforcement officials say the inquiry into Brown’s shooting is complex — and won’t be resolved quickly.

“When we get frustrated by the lack of information that’s coming out on a case like this, we need to understand that even detectives that are investigating it right now don’t have access to everything right now,” said St. Louis County Police Chief Jon Belmar.

Listen
Listening...
/
University of Missouri-St. Louis criminology professor David Klinger explains the process for investigating an officer-involved shooting and why it may take a long time for an indictment to actually come down the pike.

Once the investigation is done, it will be up to state and federal prosecutors to decide whether to indict the officer — whose identity has not been revealed. And at least one law expert said convicting the officer on federal charges could be very difficult.

First, some basic information: There are separate local and federal investigations going on right now into Brown’s death. As the investigations proceed, the unidentified Ferguson police officer is on paid administrative leave.

At the same time, the FBI, the Department of Justice's Civil Rights Division and the U.S. Attorney’s office are conducting a federal inquiry into the shooting. U.S. Attorney General Eric Holder said in a statement that a “fulsome review” is necessary to see if any federal charges could be brought.

“At every step, we will work with the local investigators, who should be prepared to complete a thorough, fair investigation in their own right,” Holder said. “I will continue to receive regular updates on this matter in the coming days. Aggressively pursuing investigations such as this is critical for preserving trust between law enforcement and the communities they serve.”

Both Belmar and St. Louis County Executive Charlie Dooley have  indicated it could be a while before prosecutors decide whether to charge the officer with a crime. Dooley said “it’s not going to be a quick process.”

“This is a very difficult and complex situation. There are many sides to the story. There’s many answers,” Dooley said. “We do not have all the facts at this point in time. As we go forward, we will try to keep you abreast of all information that we have. We want to share it with you, so you can be more apprised of what’s going on in our community.”

Those types of words likely run counter to what many people want — including state Sen. Jamilah Nasheed, D-St. Louis — who called for the officer to be fired and indicted for murder. But University of Missouri-St. Louis criminology professor David Klinger said that type of quick action isn’t likely. 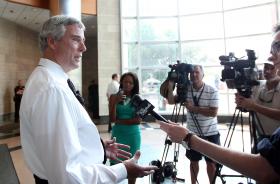 After all, investigators have to do things like interview witnesses, review Brown’s autopsy and examine ballistics evidence before coming to any conclusions.

“There’s a lot of stuff that needs to be put together,” Klinger said. “After everything is put together in terms of a report, then investigative conclusions need to be drawn. And then, and only then, could any prosecutor make any decision about whether they wish to move forward with any sort of indictment.”

Klinger said federal agencies’ involvement in the investigation is unusual, adding that the “FBI typically does not get involved in investigations of local police officer involved shootings.”

“However, it’s certainly not unheard of,” Klinger said. “The only reason that a federal investigation would be undertaken is to make an assessment about whether a U.S. attorney believes that there is adequate evidence to support an indictment against an officer for violating federal law. So the FBI has nothing to do with a state law issue. They have nothing to do with department policy. It’s purely a question of federal criminal law.”

Both Belmar and St. Louis County Executive Charlie Dooley emphasized they were happy that federal authorities were looking into the shooting. Missouri Attorney General Chris Koster said in a statement that “an outside inquiry led by the DOJ provides both impartiality and credibility to the inquiry’s ultimate findings.” 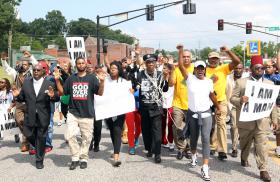 Still, pursuing federal charges against the officer may be a difficult task. That’s because federal prosecutors have to prove that the officer violated Brown’s constitutional rights.

“You can’t win the case [only by proving] that the officer killed the victim. It’s pretty clear he did. He shot him,” Goldman said. “But you also have to show, unlike a state case, that the officer did so to deprive him his constitutional rights. Whereas if it was just some regular murder case, you’d just have to show that he intentionally shot the guy.”

Goldman’s scenario has happened before. In 2001, federal investigators declined to bring charges against detectives that shot and killed two people outside of a restaurant in Berkeley. That decision came after a state grand jury led by McCulloch declined to charge the officer. 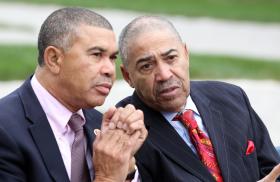 First, the letter said, the county department “may not be the most objective or credible body to investigate civil rights matters involving law enforcement given evidence of racial profiling by that department in the recent past.” That’s a reference to the state conference of the NAACP filing a civil rights complaint against the agency this past January.

Clay went onto say that only “the federal government has the resources, the experience and the full independence to give this case the close scrutiny that the citizens of Ferguson and the greater St. Louis area deserve.

“Moreover, to the extent that a pattern or practice of police misconduct may exist, such misconduct would be a clear violation of federal law … which makes it unlawful for State or local law enforcement officers to engage in a pattern or practice of conduct that deprives persons of rights protected by the Constitution or laws of the United States,” Clay wrote. “Such conduct would include the use of excessive force by police.”

Before Clay’s letter was released, UMSL criminologist Klinger said the county police “have the appropriate training and have good reputations in terms of their ability to execute sound investigations of situations of this ilk.”

Tell us what you know

This report contains information gathered with the help of our Public Insight Network. To help St. Louis Public Radio continue to report on this issue, click here: How is the police-community turmoil in Ferguson affecting you?

The police chief in a St. Louis suburb where a police officer fatally shot an unarmed black teenager says he's holding off on publicly identifying the officer because of death threats.

The officer was placed on administrative Saturday after fatally shooting 18-year-old Michael Brown.

Ferguson Police Chief Tom Jackson says he planned to release the officer's name on Tuesday but changed course after threats were called into the police department and City Hall, and posted on social media.

A town hall meeting called by the NAACP in the wake of the death of Michael Brown in Ferguson was urged Monday evening to channel anger into productive change, but not every member of the overflow crowd seemed ready to leave the community’s rage behind.

Protesters In St. Louis-Area Call For Accountability In Teen's Death

In suburban St. Louis, business owners are cleaning up after a prayer vigil turned violent over the weekend. Meanwhile, protests continue over the death of an unarmed teenager who was shot by police on Saturday.

Reporter Rachel Lippmann of St. Louis Public Radio says about 60 people gathered outside of the Ferguson, Mo., police department Monday. They're calling for police to identify the officer involved and to charge him with murder. Others want the police force diversified in the majority-African-American city.