Ferguson was put to death for the brutal murder and rape of a 17-year-old St. Charles County girl. The crime occurred in 1989, and the victim’s father, Jim Hall, said the punishment was long overdue.

“It’s been 25 years of pins and needles," Hall said. "Every time the appeal went up, you waited to find out what happened. That’s exactly where we’ve been. But last month, he had an [execution] date and felt some of the fear that my daughter felt.”

Hall said he hoped the execution would give his family a sense of closure.

Ferguson made a brief written statement, asking for forgiveness, and thanking Corrections staff for their professionalism. According to news media witnesses, Ferguson moved his feet, took a few breaths and stopped breathing. He was pronounced dead at 12:11 a.m.

Hall praised Gov. Jay Nixon for pursuing the death penalty, both when he was attorney general and now as governor.

Under Nixon's direction, Missouri has carried out more executions in the past five months than it has in the preceding eight years. The state considers that it has come up with an appropriate method, and so far, no court has told it otherwise.

But the methods have been controversial. The state obtains its drug, pentobarbital, from a compounding pharmacy that it has tried to keep secret. A St. Louis Public Radio investigation revealed that the previous supplier was selling to Missouri without being licensed in the state. The Department of Corrections has withheld the new supplier's license.

The state's secrecy and reliance on compounding pharmacies (which aren't regulated by the Food and Drug Administration) are still being considered by the U.S. Supreme Court. Missouri death row inmates say the identity is important because the quality of compounded drugs can vary from batch to batch. The state says the identity of the supplier needs to be kept secret or the pharmacy wouldn't sell the drug. 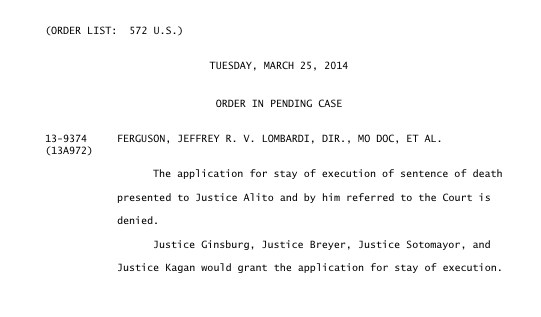 Although the Supreme Court denied a stay, there was an important change from the previous executions: One additional justice voted for a stay. Justice Stephen Breyer joined Justices Sonia Sotomayor, Elena Kagan and Ruth Bader Ginsburg in advocating for the state to hold off on the execution. In the previous ones, Breyer voted against a stay.

That change could prove to be important in the future, as the high court is still weighing taking up the case. Unlike stays, which require five votes, it only takes four justices to decide to hear a case.

Missouri continues to prepare for its third execution of the year.

Jeffrey Ferguson is scheduled to die at 12:01 a.m. Wednesday for the 1989 death of a 17-year-old St. Charles County girl. His attorneys have appealed to the U.S. Supreme Court seeking a stay.

Missouri executed Herbert Smulls in January and Michael Taylor in February. The state has also set an April 23 execution date for William Rousan, convicted of killing an elderly St. Francois  County couple in 1993.

Executions in Missouri - the social, ethical and political factors

In Missouri and across the nation, the process of executing criminals is becoming complicated. It’s one of our society’s most somber, and impactful, tasks. But how much do you know about the process? If you don’t know much about it, there may be a reason for that. Two of our colleagues at in public radio have investigated and found that the process is shrouded in secrecy. Meantime, four people have been executed in Missouri in as many months, after years of less frequent executions.

Missouri could see record number of executions in 2014

Missouri could be on pace to see a record number of executions in 2014, with two more inmates now on the verge of execution dates.

The Missouri Supreme Court on Thursday issued show cause orders in the cases of Leon Taylor and Michael Worthington. The orders give attorneys for the two men until April 14 to show why an execution date should not be set.

Missouri executed two men late last year and has already put to death two other convicted killers in the first two months of 2014 — Herbert Smulls in January and Michael Taylor in February.