By a voice vote, the Missouri House gave first round-approval Wednesday to a bill to bar construction unions and employers from requiring all employees to join a union and pay dues if a majority votes to organize. The bill, HB 582, is sponsored by Rep. Courtney Curtis, D-Berkeley.

With an even larger Republican majority, the Missouri House is expected this week to take up – and possibly approve – legislation aimed at making Missouri the 25th “right-to-work” state in the country by curbing union rights. 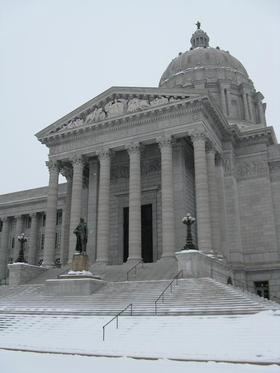 What makes this year’s battle particularly intriguing is that, like last year, it pits the current Missouri House speaker against a GOP predecessor who now is a union lobbyist.

This session’s debate also has an added factor: the racial overtones prompted by some African-American activists who contend that unions, especially those involved in construction, have not been open to minorities.

After a contentious hearing Monday night in Jefferson City, the House Select Committee on Labor and Industrial Relations voted 6-2 in favor of legislation – dubbed by backers as “right to work’’ – that would bar employers and unions from requiring all workers in a bargaining unit to pay union dues if a majority vote to organize.

The full House is expected to take up the measure – which combines two bills, HB116 and HB569 – later this week.

If it becomes law, Missouri would be the nation’s 25th right-to-work state, and the first in three years.

Supporters say such legislation would make Missouri more attractive to out-of-state businesses, while unions and their allies say it would drive down worker pay and benefits.  Both sides agree that such a measure also would cripple unions.

Gov. Jay Nixon, a Democrat, has vowed to veto any right-to-work bills, but backers believe that the larger GOP majority in the House could help win passage of the bill and perhaps override a Nixon veto.

Last November's elections bolstered the GOP numbers in the House, giving Republicans well over the 109 votes needed to override any Nixon veto.

Despite the House panel’s lopsided vote, Monday’s testimony on a related bill was about evenly split between backers and opponents, although it passed Monday by the same 6-2 margin as the primary right-to-work measure.

Eddie Hasan of Mokan, a group that seeks minority contracts within the construction industry, testified in favor of a right-to-work bill for construction workers,  HB 582, which is sponsored by Rep. Courtney Curtis, D-Berkeley.

Hasan contended that construction unions have set up roadblocks to minority applicants. “We educated and made ready over a thousand individuals to go in these unions, but I tell you right here today that the numbers have not increased significantly at all over the last 20 years.”

Jesse Lofton, president of CORE (Congress Of Racial Equality), also praised the bill as necessary to counter what he contended were unfair practices by construction unions, when it came to hiring minorities. “If the construction industry is removed from the chains of the regular labor unions, then the construction industry can become a vehicle that would help provide more equality for all workers in the state," Lofton said.”

Countering such claims was Teresa Hester, a member of the United Food and Commercial Workers union.  Hester, who also is African-American, asked, “Is there proof of non-union construction jobs that would hire black minorities?  Is there proof?  I don’t think so.”

House Minority Leader Jake Hummel, D-St. Louis, didn’t testify, but in an interview disputed Hasan’s assertion.  Hummel is a member of the Electrical Workers union, and also holds the No. 2 position within the Missouri AFL-CIO.

Hummel said that minorities made up more than a third of the members in the Electrical Workers’ recent training class.

Hummel said he believed that virtually all House Democrats – with the exception of Curtis -- will stick together and oppose right-to-work legislation.

Mark Esters, president of the St. Louis chapter of the Coalition of Black Trade Unionists, said in an interview that his group is opposing any right-to-work legislation, including Curtis’ bill.

Meanwhile, Missouri’s battle is attracting some national attention. Greg Mourad, vice president of the National Right to Work Committee, said his group was preparing to lobby Missouri legislators to pass a right-to-work bill.

The National Right to Work Committee is a nonprofit group that long has advocated for such legislation on a state and federal level. Mourad disputes assertions that such a law lowers wages. He contends right-to-work legislation could help counter what his committee views as improper government involvement on behalf of labor, such as the existence of the federal National Labor Relations Board.