David Zink executed in Missouri for 2001 murder; he says 'celebrate our true liberation'

Updated 10:15 p.m. -- David Zink has been executed by lethal injection, becoming the fifth convicted killer put to death in Missouri this year and the 17th since the state resumed lethal injections in November 2013. 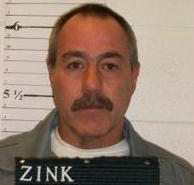 His death sentence was carried out at 7:33 p.m. at the Eastern Reception, Diagnostic and Correctional Center in Bonne Terre, and he was pronounced dead at 7:41 p.m., according to Department of Corrections spokesman Mike O'Connell.  He said Zink's final meal was a cheeseburger, french fries, cheesecake and a soft drink.

Zink also provided a final statement before being put to death:

"I can't imagine the pain and anguish one experiences when they learn that someone has killed a loved one, and I offer my sincerest apology to Amanda Morton's family and friends for my actions. I hope my execution brings them the peace and satisfaction they seek.

"I also have to apologize to the second set of victims, my family and friends, that had the unfortunate circumstance of developing emotions which will now cause them pain and suffering upon my execution. I kept my promise to fight this case for their benefit, and although unsuccessful to prevent the execution, we have been successful in exposing some serious flaws that offend the basic concept of the American Justice System.

"For those who remain on death row, understand that everyone is going to die. Statistically speaking, we have a much easier death than most, so I encourage you to embrace it and celebrate our true liberation before society figures it out and condemns us to life without parole and we too will die a lingering death."

O'Connell says there were no complications during Zink's execution, and that he requested the painkiller Valium, which he received about six hours before the lethal injection of pentobarbital.

"After serving a prison sentence for rape and kidnapping committed in Texas, David Zink abducted, sexually assaulted and murdered Amanda Morton. These acts were brutal and horrifying, and a jury determined that the appropriate punishment for her murderer was the death penalty. The guilt of David Zink in this crime is unquestioned, and my denial of clemency upholds the jury’s decision.

"As this matter proceeds to its conclusion, I ask that the people of Missouri remember Amanda Morton, and keep her and her family in their thoughts and prayers."

"The horror and fear 19-year-old Amanda Morton must have felt after being kidnapped by David Zink that July night is truly unimaginable.  David Zink callously took a young woman’s life, and it is fitting he pay by losing his own."

The execution went forward despite a new legal challenge to Missouri's execution protocol, in which four plaintiffs claim that the state is illegally spending taxpayer dollars to obtain its supply of pentobarbital.  They also sought to block Zink's execution by asking Cole County Circuit Judge Patricia Joyce for a temporary restraining order against the state of Missouri.

But Joyce dismissed the suit on Monday, stating that:

"There is no taxpayer standing.  This suit, which affects the execution of death sentences, should have been brought in the Missouri Supreme Court.  And Missouri does not violate the statutes and regulations the plaintiffs cite by carrying out executions."

The lead plaintiff, former state senator Joan Bray, filed an appeal Tuesday with the Western District Court of Appeals.  It is unknown at this time if the appeal will continue to be pursued since Zink’s execution was carried out.

Zink was not a party to the suit, but his attorney Richard Sindel agrees with the plaintiffs' position.

"We believe that the Missouri Department of Corrections is obtaining drugs illegally and in violation of both federal and state law," Sindel said, "and that there should be some court that listens to that and at least assess whether or not that's actively occurring."

Updated 7:07 p.m. -- The Missouri Dept. of Corrections has been given clearance to begin the lethal injection of convicted killer David Zink.

The U.S. Supreme Court has denied Zink's request for a stay of execution, and Gov. Jay Nixon has denied his request for clemency.  Both decisions were made public around 6:50 p.m. tonight.

David Zink is scheduled to die by lethal injection as early as 6 p.m. Tuesday (July 14) at Bonne Terre. Unless a court grants his request for a stay, he will be the fifth person executed in Missouri this year.

Zink was convicted of first-degree murder, kidnapping and rape in the 2001 death of Amanda Morton.  According to police reports, Zink rear-ended Morton’s car on Interstate-44 near Strafford on July 12, 2001.

Her car was found abandoned on the side of the highway, with the motor still running and the headlights on. Morton’s purse, credit cards and medication were also found in the car. 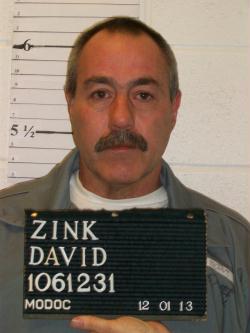 A missing person’s report that aired on TV that night caught the attention of a motel owner in Camdenton, who told police that the missing woman was Morton, and that she was with Zink when he checked in. Police used the information provided by the motel owner to track Zink down and arrest him.

Zink led police to a cemetery where Morton’s body had been buried. He gave two videotaped confessions in which he described how he killed Morton; he said that his motive for the killing was to avoid returning to prison. Zink had been released by authorities in Texas after serving 20 years of a 33-year sentence for kidnapping and raping a woman there.

Zink served as his own lawyer during his trial in 2004 and had sought to have the charges against him reduced to involuntary manslaughter. The attorneys who now represent him argue that he should not have been allowed to represent himself.

They, along with several anti-death penalty activists, also say that Zink suffered brain damage when he contracted meningitis-encephalitis as a child.

He was also the lead plaintiff in Zink, et. al. v. Lombardi, which challenged the constitutionality of Missouri’s lethal injection protocol. However, the U.S. Supreme Court has decided not to hear that case after upholding a similar challenge to lethal injection in a case from Oklahoma.

The Missouri Supreme Court has denied an appeal by a prison inmate scheduled to be executed Tuesday in the 2001 western Missouri slaying of a 19-year-old woman he abducted.

The state's high court rejected without comment a request to intervene on behalf of 55-year-old David Zink. That appeal was filed Sunday.

Zink still had appeals yet to be decided by the St. Louis-based 8th U.S. Circuit Court of Appeals and the U.S. Supreme Court. A clemency request also is with Gov. Jay Nixon.

The Missouri Supreme Court has set an execution date of July 14 for David Zink, convicted of abducted and killing a southwest Missouri woman in 2001.