Missouri Republicans have spent roughly a decade trying to implement a requirement that voters show government-issued photo identification before they can cast a ballot. After numerous starts and stops, the GOP is one public vote away from achieving a long-standing public policy goal.

Amendment 6 would authorize Missouri lawmakers to pass a photo ID statute. The constitutional change is needed because the Missouri Supreme Court years earlier had tossed out photo-ID mandates, saying they violated the state constitution.

If Missouri voters approve the constitutional amendment on Nov. 8, then a statute approved earlier this year over Gov. Jay Nixon’s veto would go into effect in 2017.

That statute would implement the photo ID mandate. It stipulates that the state would pay for supporting documents, such as a birth certification, that would be needed to procure government-issued identification. That’s expected to cost the state roughly $17 million over three years, a price tag that’s been derided by photo ID opponents. The law stipulates that if the state doesn't cover such costs, the photo-ID mandate cannot be enforced.

The implementation measure would also allow people without photo IDs to cast regular ballots if they sign a legally binding affidavit promising they are who they say they are. That provision has softened some Democratic criticisms.

So why do most Republicans want a photo ID requirement? Many in the party believe that it will make it harder for people to commit voter fraud.

Some supporters like GOP state Rep. Shamed Dogan point to the requirement that people show a photo ID before being allowed to fly on commercial airplanes. 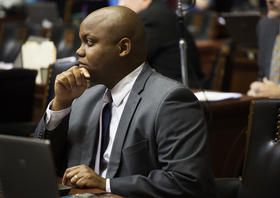 “It’s common sense that you should be able to prove who you are to vote. You don’t want somebody to cast a vote in your place,” said Dogan, R-Ballwin. “You don’t want someone showing up to the polls on behalf of someone else or someone who doesn’t exist necessarily.

“Voter fraud is a real phenomenon. We can argue over how much it happens and what the easiest types of voter fraud are. But I think it’s delusional to say that voter fraud doesn’t exist.”

“And still to this very instant, the point that I’m talking to you, Democrats are still decrying ‘Oh well, you know, we don’t have fraud. We don’t have in-person fraud,’” Alferman said. “So they’ve changed the argument to what they’re actually saying. And I think it’s extremely naïve of us to think that in-person voter fraud doesn’t also exist when we have pure examples of other types of voter fraud happening in our state.”

However, the proposed photo ID mandate would not apply to absentee ballots — which were the cause of the problems that prompted judges to order new elections.

Solution in search of a problem?

In any case, Democratic opponents of the photo-ID measure say it's all about politics.

Robin Smith is the Democratic nominee for secretary of state. She has made fighting the photo ID amendment one of her top campaign planks.

She and other Democrats strongly feel the photo ID mandate is a solution in search of a problem. And she says it makes it harder for thousands of people to vote.

“Who are they? They’re the ones we want to protect the most,” Smith said. “They’re the fragile, the elderly. They’re veterans. They’re college students who are just trying to get an education. They are minorities. They are those who are disabled and don’t own a vehicle. And therefore don’t have a driver’s license.”

Democrats note that many of those targeted groups — especially minorities, students and the poor — tend to vote Democratic.

Others point to national studies showing that cases of in-person impersonation fraud at the polls are extremely rare.

"There is no purpose for us to be changing the rules to require a state-issued photo ID in order to vote," said state Rep. Stacey Newman, D-Richmond Heights. "No one has come up with why we need to do this."

There’s some evidence that Smith and other Democrats aren’t going to let photo ID pass in Missouri without a fight.

In past elections, the chances of a ballot initiative passing go down if there’s organized opposition. A campaign committee with Missouri NAACP President Nimrod Chapel as the treasurer collected more than $100,000 to fight Amendment 6. (Most of that money is from a $100,000 donation from the Missouri National Education Association.)

Democratic officials are also making opposition to photo ID part of their rhetorical pitches. Many of the Democratic candidates' campaign fliers sent around the state feature references to their opposition to Amendment 6.

In early October, just hours before the presidential debate at Washington University, some prominent area Democrats were sounding off against photo ID at an event held near the Missouri History Museum. In front of a big blue Democratic National Committee bus, U.S. Rep. Lacy Clay said there was a moral obligation to oppose the proposal. He brought up three civil rights workers who were murdered in 1964 while registering black voters in Mississippi.

“You know Chaney, Schwerner and Goodman did not die in vain,” said Clay, D-St. Louis. “And we need to make it clear to the people that run the state legislature that we won’t tolerate it.”

Still, the outcome of Amendment 6 may hinge on party turnout. If more Republicans go to the polls to vote for the GOP ticket, then it stands to reason they’ll also vote for Amendment 6. If Democratic turnout spikes high enough, that could lessen the amendment’s chances.

A constitutional amendment on the Nov. 4 ballot could give Missouri voters access to early voting for the first time.

Missouri Constitutional Amendment 6 seeks to establish a six-day early voting period statewide. The period would not include weekends or time outside of normal business hours for polling places.

An initiative, Amendment 6, for early voting prior to the elections in Missouri will be decided November 4. The amendment gives the Missourians access to the ballet box six days earlier, ending on the Wednesday before the election.

Aaron Baker, spokesperson for Missourians for Free and Fair elections, says it would be a good idea, because this Amendment 6 will improve ballot access for all voters.

The chair of the CBC, G.K. Butterfield, told the congregation that all 46 members of the caucus are committed to comprehensive criminal justice reform.