Mo. To Return Some Of Potential Execution Drug Supply, But Questions Remain

The Missouri Department of Corrections has announced that it will be returning some of its propofol to its supplier, as the company requested almost a year ago.

But questions remain on how the state obtained the drug.

Propofol is a widely-used medical anesthetic, but the Mo. Dept. of Corrections is planning to use it for lethal injection. Missouri's Oct. 23 and Nov. 20 executions would be the first time the drug has ever been used for capital punishment.

The European Union manufactures close to 90 percent of the propofol used in the U.S. and is considering possible export limits of the drug as part of its anti-capital punishment policies. The leading manufacturer, a German company called Fresenius Kabi, also wants its product to only be used for medical purposes. In Aug. 2012, the company reduced the number of its U.S. propofol distributors to 14 and prohibited them from selling to departments of correction.

Morris & Dickson, a supplier in Louisiana, said it accidentally sent the corrections dept. a shipment of propofol in Sept. 2012. After figuring out the mistake, Morris & Dickson pleaded with Missouri to send it back.

On Wednesday, the Department of Corrections finally agreed to return the shipment.

The announcement comes the same week that the department complied with an open records request by the American Civil Union of Missouri related to how the state obtained the drug.

In a statement, a Fresenius Kabi spokesperson said they were pleased to receive their propofol back, but that going forward with the execution could still have negative impacts.

"We remain very concerned that use of propofol – even domestically produced propofol – in any executions would still lead to a severe shortage of propofol in the United States," Matt Kuhn with Fresenius Kabi said. "EU regulations do not make a distinction on the source of a drug as export sanctions or bans are considered."

And there are still questions on how the state obtained domestically-produced propofol.

According to documents obtained by the ACLU and reviewed by St. Louis Public Radio, the Missouri Department of Corrections received a shipment of propofol as recently as June of this year.

That propofol was produced by Hospira, the largest manufacturer of propofol in the US. Hospira said it shouldn’t have ended up in the hands of the department of corrections.

“We have been provided information suggesting that the state of Missouri has a supply of Hospira propofol, and that the state purchased it from an unauthorized distributor,” Hospira spokesperson Dan Rosenberg wrote in a written statement. “We have written the Missouri Department of Corrections and are notifying the governor’s office requesting that the state not use this product for lethal injection and return it to us.” 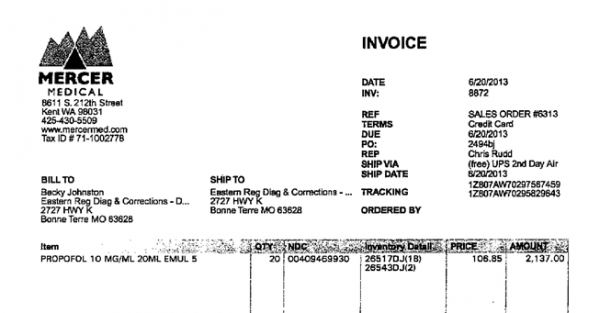 The state purchased the propofol from the distributor Mercer Medical, LLC. According to an invoice between Mercer Medical and the Department of Corrections, a sales representative named Chris Rudd sold the department 400 ml of propofol worth a little more than $2,000.

On Wednesday afternoon, St. Louis Public Radio called Rudd to discuss the sale. Rudd told us that we would have to speak to someone from the organization’s communications department. When asked if he had authorization to sell to state departments of correction, Rudd hung up.

The announcement comes two days after Gov. Jay Nixon told reporters that the state would carry out its executions as scheduled, provided the courts didn’t intervene.

“We are very cognizant of the attention this is drawing and the potential challenges that are out there," Nixon said on Monday. "But we are resolute that the issue should be one that is played out by a court of law so that the consistency of this can be maintained.”

The Missouri Department of Corrections will switch to propofol for all executions.

It’s is best known as the anesthetic that killed pop star Michael Jackson.