Updated on Tuesday, January 10: The State Board of Education officially granted St. Louis Public Schools full accreditation, a key milestone for a district that's improved after years of struggle.

The state board gave unanimous approval to upgrade St. Louis Public Schools’ status from provisionally accredited to fully accredited. Officials with the Department of Elementary and Secondary Education cited the district's rising test scores, improved attendance rates and fiscal stability as the reasons for recommending the change.

The decision comes nearly a decade after the state took over the St. Louis Public Schools system and replaced its elected board with a special administrative board. Most members of the state board credited Superintendent Kelvin Adams with helping facilitate the district’s turnaround.

For his part, Adams said the board’s decision showcased how the teachers and students made strides under difficult circumstances. He said the district still has plenty of work to bring test scores, attendance and graduate rates up even higher.

“But I think for right now, it’s a sense of accomplishment and a sense of pride that they’ve been able to reclaim something that’s been lost,” Adams said.

A bigger question going forward is whether full accreditation could prompt more families in St. Louis to send their children to St. Louis Public Schools.

“Will it mean more kids will come to the district? I really don’t know,” Adams said. “I thinkwe will make the case obviously that the district is accredited and has grown over nine years. But I think these are individual decisions and we’re going to work really hard to change people’s minds about the district.”

Read the original story: For the first time in 16 years, Missouri’s state board of education could classify St. Louis Public Schools as fully accredited Tuesday.

At its January meeting, Missouri education officials are recommending the board vote to upgrade the classification of the city school district, effective immediately.

After the recommendation became public last week, outgoing Gov. Jay Nixon visited Mason Elementary to congratulate the district on its improvement, as part of his final gubernatorial tour of the state.

Noting that a lot of “naysayers” doubted the district would ever regain full accreditation, Nixon said Thursday the district had “done the long, hard work over the last nine years to put them on precipice of being fully accredited.”

“I couldn’t be prouder of anything that’s happened during the tenure that I’ve been governor than the long, hard work that’s making a difference for these kids, this community and for future generations of St. Louis,” Nixon said.

In 2007, amid acute financial, academic, and leadership strains, the state classified the district as unaccredited and took power away from the district’s elected board,  putting it in the hands of a three-member Special Administrative Board. The district was reclassified as provisionally accredited in 2012.

On Thursday, SAB member Richard Gaines called regaining accreditation “a signal event,” and gave much of the credit to the stability provided by Superintendent Kelvin Adam’s eight years leading the district.

“We recognize that there’s still a great deal of work to be done. So there is no satisfaction that all goals have been met, but we feel good that they’re in the process,” Gaines said. “In 2007, when the Special Administrative Board was appointed, we faced what quickly became a 67 million dollar deficit. That deficit is now a 20 million dollar surplus.” 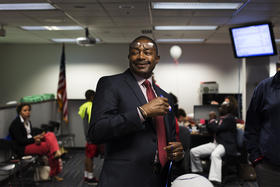 “While we are pleased and glad that the recommendation has been made, as Dr. Gaines has indicated, we realize and understand that we have a lot of work to get done,” said Adams. “And that work is not going to stop if the vote is a positive vote on Tuesday.

The St. Louis district has made significant progress the past few years, but it continues to lag behind state averages on standardized tests.

The district received passing grades on state report cards in both 2015 and 2016, in part because of that improvement.

In recognition of the effort it takes to move students from one level to the next, the state gives schools points based on either achievement or progress.