St. Charles business owners will now have to abide by new liquor laws.

The St. Charles City Council voted Tuesday night on a liquor ordinance for the city after months of debate and controversy. The law will establish several standards :

“We ended up allowing too many liquor licenses in a three block area, basically 18,” said Dave Beckering, the councilman who sponsored the bill. “What we ended up with was an area that was supposed to be restaurants, has become an entertainment district.” 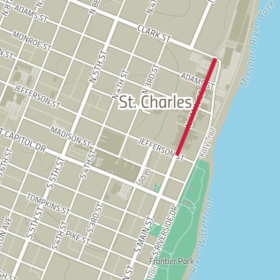 The bill has been met with controversy over the last few months, with many bar and restaurant owners proclaiming the changes will adversely affect their earnings. The final bill differs significantly from the initial measure, which aimed at preventing bars from selling alcohol after 11 p.m.

The initial version of the bill also didn’t expand beyond Main Street. That measure affected 18 restaurants with liquor licenses on Main Street between Jefferson and Clark streets. City officials said the bill was intended to reduce the number of misdemeanor crimes on the street.

The St. Charles Police Department received reports of 181 misdemeanor crimes and nuisance incidents along the nearly half-mile stretch of Main Street between Janu. 1 and early June of 2018.

“We have some public safety concerns because of the sheer number of people that come out at one time in a very small area,” Beckering said. “We spend an inordinate amount of overtime and cost relative to policing the area on Thursdays, Fridays and Saturday nights.”

Beckering said the revisions were made to the bill in response to concerns from bar and restaurant owners. The approved bill will establish the punitive point system for all St. Charles bars, but only the bars on Main Street will have to earn 50 percent or more of their sales from food.

Bar and restaurant owners on Main Street said the measure will still significantly hurt their businesses.

Some say this measure won’t stop the bar owners from taking other actions against the city.

Restaurants with liquor licenses will have to earn no more than 50 percent of their sales from alcohol starting Jan. 1, 2019.