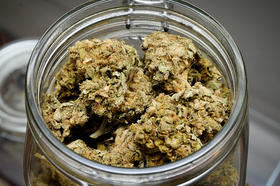 Last month, Missouri marijuana legalization group Show-Me Cannabis filed a ballot initiative for 2016 that seeks to regulate marijuana consumption the same as alcohol. Now, another petition is trying to give Missourians a broader option.

The Missouri Cannabis Restoration and Protection Act of 2016 seeks to fully legalize marijuana use and cultivation for all residents of Missouri, with no age limit.

Mark Pedersen of the Cannabis Patient Network Institute wrote the initiative, which was submitted to the Secretary of State's office on Dec. 2. He believes Colorado’s current legal marijuana infrastructure didn’t go far enough, and Show-Me Cannabis’ efforts won’t either.

"Colorado represents the one state in the Union that is the most legal," Pedersen said. "Why would we want something less than what Colorado has passed? That’s what Show-Me is presenting."

Show-Me Cannabis Executive Director John Payne is of a different mind when it comes to legalizing marijuana. He says that he believes Pedersen's initiative is well meaning, but won't convince enough Missouri voters to become a reality.

"Having no age limit might appeal to people who think cannabis is completely harmless, but that's not what I think most voters in the state of Missouri believe," Payne said. "We have to allow for some level of compromise in order to get something that will appeal to a majority to pass."

In addition to not age limits, Pedersen’s group wants to avoid allowing law enforcement to give DUI penalties for drivers under the influence of marijuana. The initiative would also legalize industrial hemp production for Missouri farmers.

In order to be put on the 2016 ballot, both Show-Me Cannabis and the Cannabis Patient Network Institute will need 160,000 signatures each.