Protesters and law enforcement officersmay have hoped for calm. But reaction to news of the grand jury’s decision to not indict Ferguson Police Officer Darren Wilson in the August shooting death of Michael Brown ended in arson, looting and tear gas.

Initial actions from protesters and police had indicated that peace had a chance. Roughly two dozen protesters gathered outside the Ferguson Police Department in the late afternoon as news came that Gov. Jay Nixon would hold a press conference at 5:30 p.m. Nixon’s appearance was to be followed by the prosecuting attorney’s press conference. Protesters played catch with a football, boiled water on a camp stove, and intermittently chanted slogans at a mostly empty Ferguson Police Department parking lot.

As the light faded, the football was put away, replaced by bullhorns, and more Guy Fawkes masks began to appear. While Nixon’s conference began at the University of Missouri-St. Louis protesters prayed for Michael Brown, his family and an indictment of some kind. As chanting and the number of protesters increased, some marched north on South Florissant Road and eventually blocked the intersection of South Florissant and Airport roads. At the police station, approximately 15 police officers formed a line behind the barriers. Although the protests were animated, they remained peaceful.

By 7 p.m. protesters had effectively blocked South Florissant Road in front of the police department. As the crowd continued growing, the initial line was replaced by police in riot gear including shields, batons and helmets. As Bob McCulloch’s press conference drew near, protest leaders gathered atop a black sedan in the middle of South Florissant. The crowd was asked to quiet as protesters turned their stereos to live radio broadcasts of the conference. Leslie McSpadden, Michael Brown’s mother, made her way through the throng to join protesters atop the car’s hood. 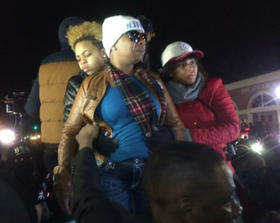 Immediately before McCulloch said there would be no indictment, McSpadden was overcome with frustration. “Everybody want me to be calm. Do you know how them bullets hit my son? What they did to his body as they entered his body? Ain’t nobody have to live through what I have to live through!” she said.

Protesters responded with “You deserve to be angry, baby” and other words of support. In the moments after McCulloch announced there would be no indictment tremors of frustration rippled through the crowd. Some protesters surged against the barrier separating the police from the sidewalk. These momentary tensions were eased for a while as the crowd returned to chanting and general shouts of protest.

Some still hoped for calm. Protester Diane Morris summed up that moment’s hopes, “We’re angry but I just want everyone to keep the peace, please guys keep the peace.” 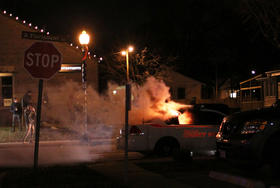 But as protesters began marching south on South Florissant Road toward the intersection of Paul Avenue, police formed a line across the street and instructed protesters to move onto the sidewalk. Many complied, but some began throwing bottles and rocks. There were calls among protesters for peace and for people to refrain from looting. But a few people began smashing an empty cop car with bricks and rocks, busting in the windows. As police began advancing, some returned to throwing bottle and rocks across the police line. Police responded by firing tear gas into the assembled protesters.

Heading back toward the Ferguson Police Department, some demonstrators began hurling objects through the windows of nearby businesses such as the Mexican restaurant El Palenque and the Quiznos next door. Police responded by firing several tear gas rounds. Many people fled, but some stayed and continued throwing tear gas canisters back at police, along with bottles and other objects.The police car with broken windows was set on fire.

One protester and citizen journalist Matt Mendoza persuaded one man attempting to burn down a local bar to move on.

“We sort of squared off a little bit. All you need is that little bit of resistance,” Mendoza said. Mendoza said he felt complicated about the evenings events. He supported the right to protest and the need to challenge institutional issues of race wealth disparity but didn’t think he had enough information to know if the grand jury responded adequately.

“You know deferring to their judgment at this point feels like the most rational thing to do because they know all the facts and I don’t,” Mendoza said.

Despite efforts of law enforcement and peaceful protesters, however, the escalation of violence spread to the surrounding area. Additional damage was done to businesses along South Florissant Road and another police car was set on fire. Looting and arson took place at a number of businesses, including several along West Florissant, a stretch of road central to August protests and earlier clashes with police.

Police officials said while they didn’t expect it, they were not under-prepared.

“Unless we bring in 10,000 police officers in here, I don’t think we can prevent folks that really are intent on just destroying a community,” said St. Louis County Police Chief Jon Belmar. “I didn’t foresee an evening like this, I will be honest with you.” 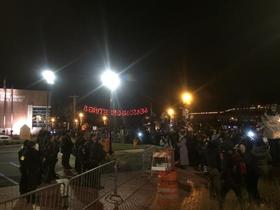 Belmar said police officials were initially hopeful. He said he even instructed officers to “back off” and treat demonstrations much like policing for a baseball game.

But soon Belmar said police had to use tear gas and bring in tactical units to try to protect people and local businesses from a “death funnel” of violence. Belmar said he personally heard about 150 shots fired, noting he “got lit up” and faced gunfire at one point, and even recovered a semi-automatic handgun. Officers were hit by rocks, bottles and batteries.

Police said at least a dozen buildings were set on fire, and most of those were complete losses. Belmar said gunfire prevented firefighters from responding at some points.

According to Belmar, looting occurred along Old Halls Ferry and New Halls Ferry, from West Florissant Avenue to I-270, at stores including Sam’s Meat Market, a public storage building and Family Dollar. While police experienced no serious injuries, one reporter was injured and an elderly man was carjacked and run over. Police made at least 29 arrests.

“I don’t have any hesitation in telling you that I didn’t see a lot of peaceful protests out there tonight and I’m disappointed about that,” Belmar said. “I’m not saying there weren’t folks out there who were out there for the right reason. I’m saying unfortunately this spun out of control.”

Belmar discounted the idea that the timing of the grand jury announcement contributed to the violence, and said he was given plenty of notice about an announcement by St. Louis County Prosecutor Bob McCulloch. He also said police spent “countless” hours reaching out to different protest groups, including the Don’t Shoot Coalition and Lost Voices, to try to prevent any such unrest. Missouri State Highway Patrol Capt. Ron Johnson also said a curfew was unlikely to have helped, since the unrest began early in the night.

Though no lives were lost and police fired no shots, Belmar said these riots were worse than the most intense nights during August’s protests. He said the community’s fabric has been torn apart.

“There’s not a whole lot left on West Florissant between Solway and Chambers Road, and those are businesses that may never come back, so frankly, I’m heartbroken about that,” Belmar said.

Johnson agreed with Belmar, and noted that he did not see many clergy during the protests trying to diffuse the situation, as they had in August.

“Our community has to take some responsibility for what happened tonight, as far as tearing our community apart,” Johnson said. “This cannot happen. We talk about peaceful protests and that did not happen.”

Belmar said the National Guard was present Monday night, but that more troop assets may be brought in to free up more police officers.

Ferguson wasn't the only area to see protest after it was announced that officer Darren Wilson would not be indicted. Hundreds marched through the Shaw and Tower Grove neighborhoods in St. Louis. 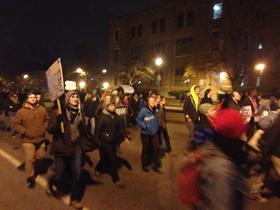 The area has also seen many protest since the police shooting death of Vonderrit Myers.

Initially, protesters peacefully marched up and down Grand Boulevard, having minimal contact with police who mainly focused on diverting traffic away from demonstrations.

After hearing the decision, Beth Mayberry felt she need to come out and express her frustration. She says she found protesting comforting.

“It feels good. There’s a lot of solidarity I feel like everyone’s together and listening to each other and helping each other out,” she said

Protest did not remain calm. Tension between police and activist escalated after demonstrators marched onto I-44, shutting it down near where it intersects with Grand Boulevard.

The protest caused backups along the interstate. After blocking the road for more than 30 minutes, protesters were asked to disperse by police or face arrest. The crowd slowly started to move back onto Grand, marching south to Arsenal, where they blocked traffic. 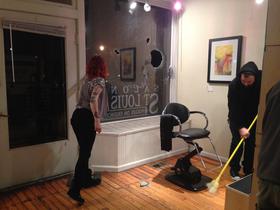 At this point several business along Grand were vandalized. Marie McMahon has owned Salon St. Louis for more than 20 years. She arrived to find two of her windows shattered last night.

“Security called me and let me know that the glass breakers were activated and so I knew immediately what was happening, I've been watching the news all evening and I was thinking that protests here on Grand were peaceful, which I was very happy about and very proud of,” she said. “So I was disappointed when I got that call because I knew what it meant and I knew that things had changed.”

Police continued to pressure protesters to disperse at the corner of Grand and Arsenal, deploying smoke bombs.

According to the Post Dispatch, as the night went on and things heated up along Grand and St. Louis Police Chief Sam Dotson said over 60 police units were brought in, in full riot gear, to restore calm.

“We tried to move people out, but they seemed to want to stay and break windows and break into the backs of buildings,” he said. “So we're going to clear these streets.”

Some protesters fled, the few dozen protesters that remained gathered in front of Mokabe’s cafe on Arsenal, refusing to disperse. They demonstrations were surrounded by police.

On Twitter, some protesters said they were teargassed while inside Mokabe's cafe, which they said was a safe zone. 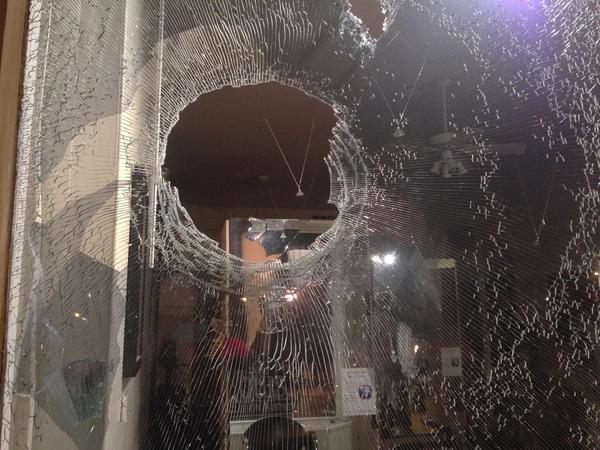 The AP's roundup of Ferguson coverage following "no true bill"

The Associated Press has covered the news out of Ferguson, Missouri from a number of angles in the less than 12 hours since St. Louis County Prosecutor Bob McCulloch announced a Grand Jury did not indict Ferguson police officer Darren Wilson for the August 9th killing of 18-year-old Michael Brown. We decided to display all of the coverage here:

A grand jury in St. Louis County has decided not to charge Ferguson police officer Darren Wilson with a crime for the Aug. 9 death of Michael Brown, an unarmed, 18-year-old black man.

An attorney for the Michael Brown family is calling the grand jury process in the Darren Wilson case "unfair."

Speaking on ABC’s This Week, Benjamin Crump said that St. Louis County prosecutors should recommend that the grand jury indict Darren Wilson for the death of Michael Brown, instead of leaving the decision entirely in the grand jury’s hands.

ABC legal affairs anchor Dan Abrams interjected, saying that it is not uncommon for prosecutors to omit a recommendation in high-profile cases.

The civil rights anthem “Eyes on the Prize” rang out in the Shaw neighborhood Saturday when a group gathered for a walk to promote racial unity paused beside the memorial for VonDerrit Myers, the 18-year-old who was fatally shot there last month by an off-duty St. Louis police officer.