Forward Through Ferguson has called for improvement in several areas to establish greater racial equity within St. Louis.

The non-profit released its first The State of the Report scoring where the region is on the 47 signature calls to action first identified by the Ferguson Commission in 2015. The latest report found that all 47 priorities have experienced some level of implementation, but only five of those had been achieved. 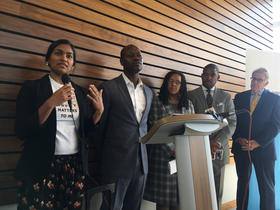 Scores were calculated from the responses of 38 survey participants who answered questions about the city’s racial equity from 2015 through January 2018. Each priority was scored on a scale from zero to five and split into three categories. Those categories were Opportunity to Thrive, Youth at the Center and Justice For All.

The Opportunity to Thrive category and the Youth at the Center categories showed the greatest level of implementation with an average score of 3.17 and 2.98 respectively. The Justice for All category showed the lowest level of progress with a score of 2.06. The former category received a lower score due to little improvement within the municipal court reforms.

Forward Through Ferguson Executive Director Yinka Faleti said changing the cash-bail system is one of the priorities under the Justice For All Category that needs to be changed.

“If someone cannot afford a bail, they are put in jail until they can either pay or someone can pay on their behalf,” Faleti said. “That disproportionately affects people in communities of color.”

The report also highlighted several state level policies that have halted the organization’s goals. Those policies included the rollback of Senate Bill 5 which sought to cap the amount of revenue municipalities could receive from traffic stops. Faleti said he hopes Gov. Mike Parson will read the report to establish more equity in the city.

“Much of what needs to be done from a racial equity standpoint, even if we do it here from a local level, can be undone by the state,” Faleti said. “We saw the minimum wage that was passed here locally and we saw that rolled back by the state.”

The objective of the non-profit is to establish racial equity by 2039. That year will mark the 25th anniversary of Michael Brown’s death.