Is progress being made on Ferguson Commission's payday loan recommendations?

The recommendations of the Ferguson Commission are being touted as a potential roadmap to move forward in the St. Louis region after this year's protests stemming from the not guilty verdict in the murder trial of a former St. Louis Metropolitan Police Officer.  Some of the proposals deal with predatory lending, which often traps low-income earners with very high-interest loans.

There have been developments to deal with the issue in St. Louis, Jefferson City, and Washington, D.C. since the commission released a final report. 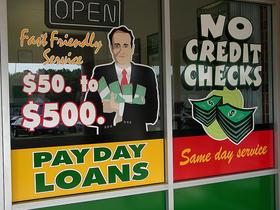 Members of the panel, which was established after Michael Brown's death in 2014 to come up with potential solutions to the region's racial tensions, called for an end to predatory lending by changing underwriting standards, payment terms, collection practices and how high-interest rates can go on short-term loans. The commission called for a cap at 26 percent, while the rate on a two-week loan in Missouri could reach 75 percent.

A measure passed by St. Louis city voters this year is designed to be a starting point.

"The aim of Proposition S was to take into local municipal hands some of the regulation on payday loans," Ward 20 Alderwoman Cara Spencer said.

"It imposes a fine which allows the city to actually fund regulation of the industry. But its uniqueness is that it also requires that lenders provide a list of alternatives to payday lenders to their customers."

Spencer is also the executive director of the advocacy group, Consumers Council of Missouri. The organization has been looking into predatory loans for  some time and Spencer says the state has the highest rate cap in the country for payday lenders. It's 75 percent interest on a two-week loan.

"That translates to one-thousand-950 percent APR. That is absolutely unbelievable."

But there is only so much elected leaders in the city can do. The more significant change would likely have to come from lawmakers in Jefferson City. A bill to limit the number of times a loan can be renewed did not get a hearing during this year's legislative session. But its main backer, Republican State Rep. Charlie Davis from Webb City is not giving up. He plans to file it again next year. It also restricts how many payday loans a person can carry at one time, but it doesn't deal with interest rates.

"On a very short-term loan, a week or two weeks, a high-interest rate is irrelevant," he said.

"Because you pay it off. You pay some extra money and you're done."

Davis' bill is not related to any recommendations from the Ferguson Commission.

(This map shows locations of many short-term loan businesses in St. Louis as of late February 2017. It was originally included in a story by St. Louis Public Radio's Maria Altman about Proposition S.)

Even though lawmakers in Jefferson City do not appear ready to tackle the interest rate aspect of the issue, one person who had to turn to a payday loan a few years ago to help with some sudden bills insists something needs to be done.

"What I got was like about a thousand percent," said Cedric Jones, whose story is highlighted on the Forward Through Ferguson website.

"If you get it you got to pay it back the next payday, but it's still an astronomically-high interest rate."

Along with St. Louis and Missouri State Capitol, the issue continues to draw attention in Washington. The Consumer Financial Protection Bureau recently finalized a rule that would require lenders to make sure a customer had the ability to payback any loaned money. But its implementation is uncertain. Bureau Director Richard Cordray is stepping down in a few weeks and could be replaced by federal Budget Director Mike Mulvaney.

That could change the CFPB's course.

Mulvaney is considered to be more favorable to banks and payday loan operations. He would have the option to delay any regulation that has yet to take effect, including the payday lending rule. It's considered controversial. At least one trade organization, Financial Service Centers of America, has come out against the proposal. It claims the rule would "devastate" an industry that has 30-million customers a year and 60-thousand jobs.

In a release, the organization said the financial service center industry is "already a highly-regulated industry."

That organization turned down an interview request. The CFPB did not make someone available for a recorded interview.