A Missouri Senate committee is weighing legislation that would eliminate the 1 percent earnings tax in both St. Louis and Kansas City, effective Dec. 31, 2017.

Republican Kurt Schaefer, R-Columbia, who's also running for attorney general, brought his bill before the Senate committee on ways and means Thursday.  He said that a similar tax in Maryland was ruled unconstitutional, and it could cost Missouri millions of dollars if the same thing happens here.

Schaefer said. "My concern also is:  is the General Assembly, the entity that enabled this and created this tax, if that lawsuit gets filed, which it will, and we lose, the question is going to be, is the state of Missouri on the hook?"

He also says the earnings tax is economically harmful and affects people outside of the St. Louis and Kansas City areas. 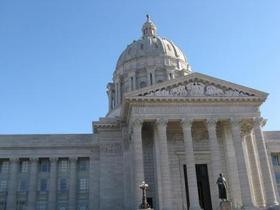 A few witnesses testified in favor of the bill, including Sean Marotta, an attorney from Washington D.C., who represented the plaintiff in Wynne v. Maryland State Comptroller, the decision that struck down Baltimore's version of the earnings tax. He argued that the St. Louis and Kansas City earnings taxes result in people being double-taxed for the same dollar:

"If I live in Missouri and I work somewhere else, I pay income tax to both Missouri and the state where I work.  Missouri will tax all of my income, (and) the state where I work will tax the income I earn over there; and Missouri will give me a credit, so that way I'm not double-taxed.  I get a credit for the money I've paid to another state...and that's constitutional, that's what should be done.  But St. Louis and Kansas City don't do that, and that is what makes their taxes unconstitutional under the Wynne decision."

"It's a bleak future in Kansas City without the earnings tax," said James. "We would have to double our sales tax (and) we would have to triple our property tax ... and Kansas City currently doesn't have the authority to even raise those taxes."

He told the committee that losing the earnings tax would cost Kansas City $230 million, and would force him to cut the city's work force in half.

“Eliminating the revenue generated by the earnings tax would cost us the equivalent of our police department and a whole lot more, a big part of our fire department as well," Slay said. "That doesn't mean we would eliminate those, but as Mayor James was saying, these are such big parts of our budget that when you slash a big part of it, it would certainly affect everything we do, including public safety."

Slay also pitched a few ideas to the committee for boosting St. Louis' revenues, likely knowing that they would go nowhere.

Slay added that 88 percent of St. Louis voters chose to keep the earnings tax five years ago. It is expected to be on the ballot again in April.

James also testified that it passed in Kansas City with 78 percent of the vote the last time it was on the ballot.

No action was taken on Schaefer's bill Thursday.

Note: in an earlier version of this article Wynne's name was misspelled. Follow Marshall Griffin on Twitter:  @MarshallGReport

Kansas City civic and business leaders say a Missouri lawmaker's effort to eliminate the city's earning tax would decimate the city's budget if it succeeds.