Rollin' on the river: Delta Queen steamboat to again travel the Mississippi | KBIA

Rollin' on the river: Delta Queen steamboat to again travel the Mississippi

The historic Delta Queen steamboat could be cruising the Mississippi River and other inland waterways in 2020, now that it has received an exemption from federal safety regulations that kept it from making overnight excursions. But first, its owners must secure about $12 million for renovations to make the vessel riverworthy again.

On Dec. 4, President Donald Trump signed into law an exemption that allows the wooden steamboat to operate, despite a 1966 safety regulation that requires such vessels to be constructed of noncombustible materials.

Discussions with potential investors hinged on that exemption and are now moving full speed ahead, said Cornel Martin, president of the Delta Queen Steamboat Company.

“There was always the same response: ‘We're interested, but come talk to us once the exemptions are approved,’" he said. “We actually are pursuing four different groups now. There are people very, very interested in preserving and securing and seeing the Delta Queen up and running again.’’

The 90-year-old sternwheeler has been out of cruise service since 2008 and is currently docked in Houma, Louisiana. Once renovations are complete, it will be headquartered in Kimmswick, Missouri, about 25 miles south of St. Louis.

The Delta Queen has 88 cabins and can accommodate 176 passengers and a crew of 80. It will sail along the nation’s inland waterways — including the Mississippi, Illinois, Ohio and Arkansas rivers — and will stop at more than 80 ports.

“We’re hesitant to try to peg it to a day in 2020 or even a timeframe until we get the engineering and design work approved by the U.S. Coast Guard — which, you know, could be a rather long lead time,’’ Martin said.

The Delta Queen operated as a hotel in Chattanooga, Tennessee, from 2009 to 2014, so the interior of the vessel has been kept in good condition and will require only cosmetic repairs, Martin said. The steamboat’s original features include Tiffany-style stained-glass windows, hardwood paneling and a grand staircase with crystal chandelier.

“We've been doing some maintenance on board to keep her safe and secure and dry,’’ he said. “But the real bulk of the renovations that need to be done are in the mechanical systems. And those are all big-ticket items. So, we really couldn't move forward with those before now.’’

“It's a great early Christmas present for all of us who love and support the Delta Queen and have been working to try to get her back up on the rivers again,’’ Martin said. 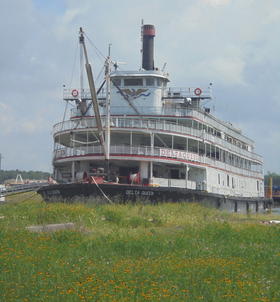 The ownership group has developed plans to replace the steamboat’s century-old boilers, Martin said. They were built in 1919 and intended for a Navy destroyer that was never built. The government sold the boilers as surplus.

Other major renovations include replacing the vessel’s generators and sewage-treatment system, as well as the heating and air-conditioning systems.

“The electrical panels that are onboard are going to have to be enclosed in a non-combustible space with a dedicated fire-suppression system,’’ he said. “These are all things we agreed to in the legislation to make the boat safer.”

The exemption also requires the Delta Queen’s owners to annually convert at least 10 percent of the wooden sections of its superstructure to noncombustible materials, giving priority to areas near engines, boilers and fuel tanks.

The Delta Queen is a throwback to the bygone days of the steamboat era. It was built in 1926 and originally ferried passengers, vehicles and freight between Sacramento and San Francisco. During World War II, it transported soldiers from the docks in San Francisco to ships anchored in the harbor.

Greene Line Steamers of Cincinnati bought the Delta Queen in 1946 and had it towed through the Panama Canal to New Orleans. The steamboat was refurbished and began cruising the Mississippi and its tributaries in 1947.

The Delta Queen is the last of the nation’s authentic steamboats that are viable enough to return to cruise service, Martin said. It was named a National Historic Landmark in 1989 and is a favorite with history buffs.

Beginning in 1966, the Delta Queen received nine exemptions that grandfathered the vessel from the 1966 Safety of Life at Sea Act, which regulates passenger vessels carrying 50 or more passengers overnight on domestic U.S. waters. Previous owners let the exemption lapse, but Martin said his group has been trying to get the steamboat back in the water since buying it in 2012.

The Coast Guard opposed the exemption, but Martin believes his company will be able to work with the Coast Guard to address safety concerns.

The Jefferson County Economic Development Corporation estimates that the Delta Queen will create about 170 jobs in the St. Louis area, once it begins operating out of Kimmswick.

The Delta Queen Steamboat Company operated a restaurant for a time in Kimmswick, but Martin said there are no plans to reopen it when the Delta Queen begins operating from the site.

“The concept of the restaurant was to put a foothold in Kimmswick and to basically let people know that we were there to stay,’’ Martin said. “We didn't want to just have an announcement that the boat was coming and then two years later, people were scratching their heads saying, ‘What happened to those people?’ We're a cruise company, not really a restaurant company. And I think the restaurant served its purpose.’’