On the evening of July 4 of this year, the Energy Express Travel Center on North Broadway Street looked like the scene of a neighborhood party. Video footage from that night released by the St. Louis Metropolitan Police Department shows dozens of cars converging on the gas station lot. Soon, individuals carrying firearms and wearing ballistic vests appear.

Video footage from that same location on July 29 shows a similar gathering, but this time people begin firing their weapons into the air before returning to their cars and racing off into the night.

Listen
Listening...
/
North Broadway has become the sight of an alarming trend, "armed cruising." Business owners and city officials speak on the actions being taken to reduce the practice.

A gas station might seem like an unusual hangout location, but it’s become prime real estate for a trend in St. Louis known as “armed cruising.” The practice is described as an extension of illegal street racing with the addition of firearms. 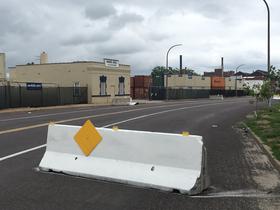 For years, business owners have watched North Broadway transform from the home of industrial businesses to an urban race track for drag racers and bikers. Recently, the frequent use of firearms has only added to the concerns that many business owners in the area have.

“Sometimes they’re running in packs of a hundred cars together,” said a business owner on North Broadway. The individual wished to remain anonymous out of safety concerns. 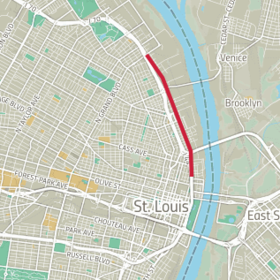 In early August, a 22 year-old man was seriously injured on North Broadway in a racing incident, the business owner said. Video footage showed the vehicle spinning out of control and crashing into a tree.

“Looked like they were Al-Qaeda in St. Louis,” said Chris Monroe, the manager and owner of Downtown St. Louis Furniture Warehouse, located on North Broadway. “When I saw it I said, ‘Wow, that’s not too far from here.’”

Monroe said he only saw the incident on the news and that the firing of weapons has not affected his business, in contrast to the business owner who chose to remain anonymous.

“We do have bullet casings that come through the roof,” the business owner said. “A lot of times when it rains, we can tell where the bullets have come through because there’s a stream of water.”

‘They are breaking the law’

The St. Louis Metropolitan Police Department is paying attention to the armed-cruising trend.

“Throughout the last several weeks we have noticed an increase in the number of armed individuals who are participating in cruising in the area of Broadway and Grand,” said Michelle Woodling, a spokesperson for the St. Louis Metropolitan Police Department.

Woodling said instances involving firearms are common when cruising occurs, but she added that the police have noticed an increase in the armed element over the past few weeks.

“The Chief (of police) did acknowledge that people have the right to bear arms,” Woodling said. “However, when people fire shots into the air and at people, they are breaking the law.”

Missouri law allows individuals to carry open and concealed firearms without a permit.

“If you shoot a firearm within a hundred yards of an occupied school or church, if you’re intoxicated or handling a firearm in a negligent manner, if you are shooting a firearm at any person or structure while in a moving vehicle; all of those are firearm offenses,” said Susan Ryan, the spokesperson for the St. Louis Circuit Attorney’s office.

Ryan said she couldn’t speak specifically about armed cruising since she is unfamiliar with the details; however, she did note the consequences from these crimes could result in felony charges and more depending on the severity of the crime.

Both business owners said they have seen more city and police attention given to North Broadway over the last few weeks in an effort to curb armed cruising on the street. Part of this effort is the installation of barriers as a temporary measure to determine how traffic would be affected. The pilot project covers just over two miles, between just north of Cass and just south of East Grand.

The barriers have brought some optimism to the business community. Both business owners agree that this is a start, but the anonymous business owner said employees have noticed racers using the barriers to their advantage.

“From what he witnessed, they go all up and down Broadway and weave in and out of the barriers,” the anonymous business owner said.

Safety remains the primary concern for both business owners interviewed by St. Louis Public Radio. It’s something the anonymous source emphasized. While employees are not present when armed cruising occurs, there is still cause for concern.

Since the increase in police presence along North Broadway, the St. Louis Metropolitan Police Department has recovered approximately 12 firearms and taken 24 individuals into custody.